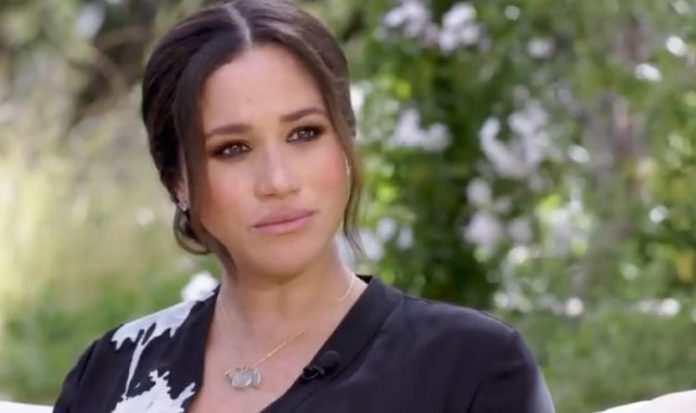 Viewers got a glimpse of the much-anticipated sit-down between Oprah and Meghan Markle in a new teaser released by CBS. The clips show the Duchess of Sussex sat cradling her baby bump as she fields questions from the US TV host. Oprah touched upon comments made by Meghan that life in the Royal Family had been “almost unsurvivable.” Meghan’s pal also reminded viewers the couple have said “some shocking things” in the 30-second promo. The full interview is set to air on March 7.

Appearing to be quoting the Duchess, Oprah remarked: “Almost unsurvivable sounds like there was a breaking point.”

The segment is accompanied by a dramatic frame of an emotional Megan Markle sitting across from the TV host on an outdoor lounge chair looking ahead.

Oprah also hinted that the Queen’s grandson and his wife may have said things that Palace aides will be unhappy about.

Facing the couple on the outdoor interview setting in California, she said: “You’ve said some pretty shocking things here.”

The media mogul goes on to clarify there is “no subject that is off-limits”.

Prince Harry is also seen talking to the host, saying his “biggest concern was history repeating itself.”

The Duke and the Duchess are seen sitting alongside each other, holding hands.

Daily Mirror columnist Darren Lewis claimed critics of the couple are blinded by traditional concepts of duty and are out of touch with modern royal practices.

Arguing that the Duke and the Duchess are supported by younger generations, he wrote: “As the metaphorical battle lines take shape you have the older heads on one side, ensconced in the archaic idea of duty which is simply another word for control.

“They are the critics who see being a Royal as turning up when the Buckingham Palace roster demands it with your wife keeping schtum.

“On the other side are your kids, your grandkids. Generation Z who see the Duke and Duchess of Sussex as being completely on their wavelength.”