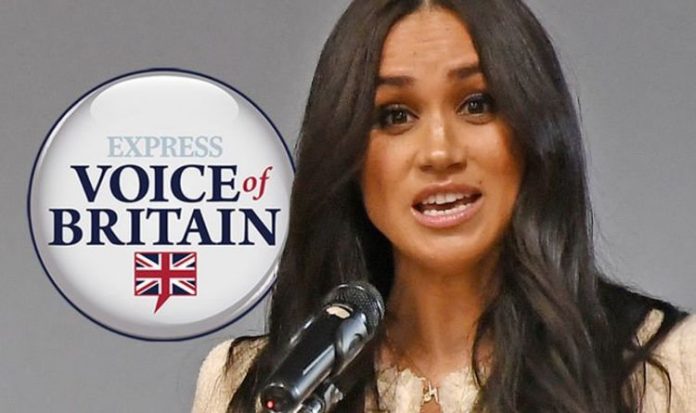 Meghan Markle is claimed to be following a “well-worn path” into US politics, according to Mike Trujillo, a prominent Democratic strategist. The political expert said the Duchess is “definitely putting her toe in the water” and predicted her entry into politics wouldn’t take long. In response to the comments, Express.co.uk asked its readers if they think Meghan will enter the political foray.

The poll, carried out from 7pm on February 13 to 7am on February 14, asked: “Do you think Meghan Markle will make a move into politics?”

Over one quarter, 27 percent (297 people) thought the Duchess would avoid entering politics and voted “no”.

Readers then took to the comments to explain why they thought Meghan would make a move into politics.

One person said: “She has already involved herself in politics, in deliberate violation of the rules of the Royal Family, and dragged her spineless fool of a husband along with her.”

A second user wrote: “Her ego is certainly big enough.”

A third said: “This is just Megan PR nothing more.”

JUST IN: Royal Family LIVE: Philip will see Megxit as ‘dereliction of duty’

One person said: “She will try but whether the US voters would back her is another thing.”

A second user wrote: “I doubt that the American people will vote for a Duchess of England (or even an ex-Duchess) and wife of an English prince (or even an ex-wife).”

One reader suggested Meghan wouldn’t be suited to politics, and wrote: “She is too thin-skinned, has no original ideas – just a rehash of other people’s words.

“She is not likeable and does not work well with others.

“She also blames others when things go wrong and does not have the temperament to accept criticism or negative comments.”

Other users simply responded saying they “couldn’t care less” if Meghan entered politics or not.

One person wrote: “Sorry, but who actually cares?”