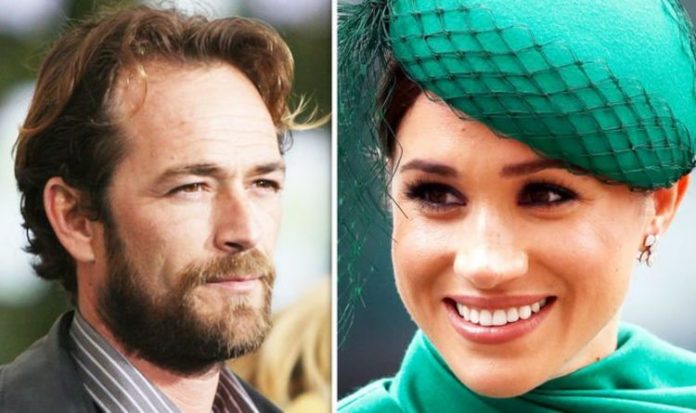 During a Pop Culture Personality Test, Meghan revealed that Luke Perry was her “first celebrity crush”.

Perry’s character was the son of a business tycoon and appeared multiple times from 1990 until his final appearance in 2000.

Meghan admitted that she was surprised when she spotted her teenage crush in public many years later.

Meghan reenacted her starstruck moment where she was unable to speak due to excitement, in a 2013 interview with Entertainment Weekly.

Imitating her young self, she breathlessly gushed: “Oh my God… I love you so… I loved you in… in that Soft & Dri commercial.”

Instead of listing her more famous role she felt embarrassed over having mentioned Ms Bleeth’s 1997 TV advert for Soft & Dri antiperspirant.

Meghan recalled her response: “She just looked at me very blankly like, ‘Ok, thank you’ and I walked very meekly back into Humphrey Yogart.”

During the quick-fire questions, the star also revealed that she often yelled at the TV screen when the quiz show Jeopardy! was on.

She said: “I’ll tell you why, because I have so much of my pride involved in that game.

“When I play with someone else and I get it wrong ‘Ahhh!’ – or when you know the answer but you don’t say it right, it drives me nuts!”

Meghan added that she had watched When Harry Met Sally… countless times and quoted several of her favourite lines from the 1989 romantic comedy.