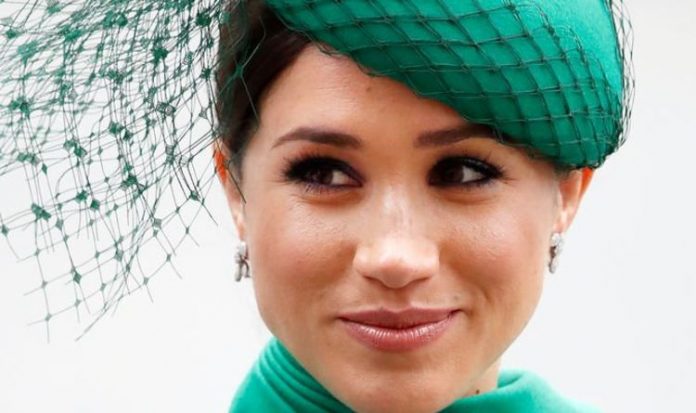 It has been more than a year since Meghan and Prince Harry left the UK for North America. In what was soon dubbed Megxit, the pair cut ties with the Royal Family in order to “carve out a progressive role” outside the Firm, while simultaneously pursuing private lives. Earlier this week, the pair announced that they were expecting their second child.

A spokesperson for the couple said they were “overjoyed”, while a Buckingham Palace spokesman said the Queen, Duke of Edinburgh, Prince of Wales and the rest of the Royal Family “are delighted and wish them well”.

Reports have since surfaced that suggest the Queen is set to hold meetings to decide who assumes Meghan and Harry’s roles as the pair have no plans to return to royal life.

The emergency meetings will take place with aides, with royal sources having suggested that the matter will be settled before March 31.

A string of controversies has followed Meghan and Harry since their departure.

Meghan Markle: The Duchess appeared to air out her political views during a royal visit to Ireland (Image: GETTY)

The Queen: Her Majesty is reportedly readying to hold meetings on Meghan and Harry’s positions (Image: GETTY)

The most recent came after Meghan said the Palace had “dictated” the details of Archie’s certificate, and was “offended” by the suggestions that she wanted to become “nameless” on the document.

The former Hollywood star claimed the Palace had forced her to change her given first names, “Rachel Meghan”, a month after Archie was born in June 2019.

In the 2020 documentary, ‘Meghan Markle: Changing Traditions’, entertainment reporter Ashley Pearson said Meghan’s tendency to voice her opinion and “take sides” was something that landed her in trouble with the Firm.

It came as Mr Pearson talked about Meghan’s visit to Ireland shortly before she announced she and Harry were expecting their first child, Archie, in 2018.

Here, Meghan was pulled into Ireland’s abortion debate, causing furore over the rubbishing of a centuries-old tradition that Royal Family members do not air their views on political issues.

JUST IN: Prince Harry faces calls to be cut from line of succession

Ms Pearson said: “Meghan Markle is not someone who just wants a pretty designer dress and a glass of champagne.

“She is actually engaged and interested in the politics and the storylines of where they’re going.

“In fact, she got in trouble not that long ago when she met someone in Ireland who was in Parliament, I believe, and congratulated them on the defeat of a bill that would have nullified abortion in Ireland, and said, ‘That’s great’.

“She ended up getting in trouble because the Irish politician tweeted, ‘Oh I had this great conversation with Meghan and she congratulated us on the defeat of this initiative.’

Prince Harry: The pair currently reside in sunny Los Angeles in the US (Image: GETTY)

“And everybody was like, ‘You can’t take a side Meghan, you can’t defend any position.’

“I think, in all honesty, one of the most difficult and challenging things in this whole experience for Meghan, is the royal tradition of not taking a side, of not showing your political leaning, of not having opinions.

“That is something that I think Meghan has already and will very much continue to struggle with.”

During the visit, Meghan attended a garden party at the British ambassador’s residence in Dublin.

Then Irish Senator Catherine Noone tweeted that she had “had a chat” with the royal about the May referendum that approved scrapping Ireland’s abortion ban, and wrote: “She watched with interest and was pleased to see the result.”

Ms Noone appeared to backtrack with a later tweet, and said: “I should say she seemed pleased—she was interested and very measured, not political at all.”

She later told the Irish Independent that her words had been “unintentionally misleading”.

However, others present at the garden party also tweeted about their conversation with Meghan about the issue.

Una Mullally, a writer, tweeted a photo of her and Meghan, with the caption: “Great to chat with Meghan Markle, Duchess Of Sussex, about Repeal and the importance of her feminist activism. So important to have people in her position championing women’s rights. Total sounder!”

The Firm has maintained political neutrality since the 17th century, when King Charles I lost his head during the English Civil War.

While there is no law against the royals having political opinions, the family tends to refrain from taking sides since the Queen’s constitutional role is to represent the entire country.

Airing out political views, as seen with former Prime Minister David Cameron’s comments about the Queen in light of the 2014 Scottish independence referendum, makes life difficult for the monarchy.