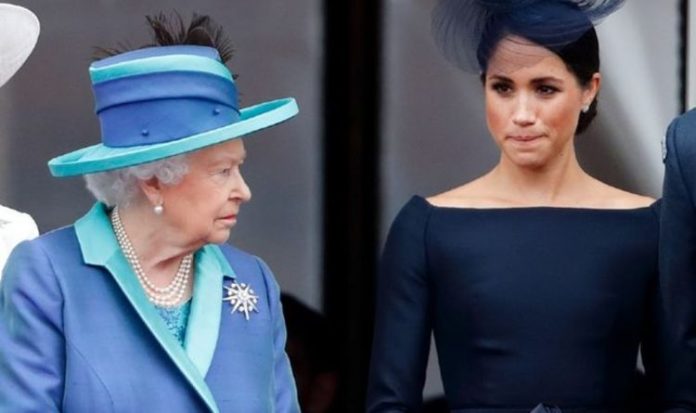 Prince Harry may make his UK return without Meghan Markle or Archie Harrison, according to reports. The Duke and Duchess of Sussex’s decision has been attributed to “personal and practical reasons”. Royal correspondent Robert Jobson spoke to Australia’s Sunrise morning show about what this would mean for the Queen and Prince Philip, who are both celebrating milestones this year.

He told viewers: “It would have been a good idea for her to join, and end all the rumours and speculation and talk of feuds.

“I think it would have been an easy way to deal with it.

“But she clearly doesn’t want to come.

“It’s not only the Queen’s 95th birthday, you’ve got Philip turning 100 and the unveiling of the Diana statue.”

READ MORE: Meghan and Harry going ‘guns blazing’ as they ‘have nothing to lose’

Mr Jobson continued: “I think their argument is that all the tabloids will focus on the pictures of Meghan, but that’s neither here nor there.

“I think they should just brazen it out and come.

“But it looks like she’s staying back with Archie and it’s just going to be Harry on his own.

“It just seems that she’s confirming everything that everybody is saying.”

When they announced their stepping back, the Sussexes initially claimed they would be splitting their time evenly between the UK and North America.

However due to the coronavirus pandemic they have been unable to return to Britain thus far.

The Duke of Sussex already confirmed in a virtual engagement last year that they would have been back already had it not been for travel restrictions.

Many expected that the couple would bring their family over for the summer period this year.

As Mr Jobson explained, the royal calendar has many milestones including a scaled-down Trooping the Colour for the Queen’s 95th birthday.