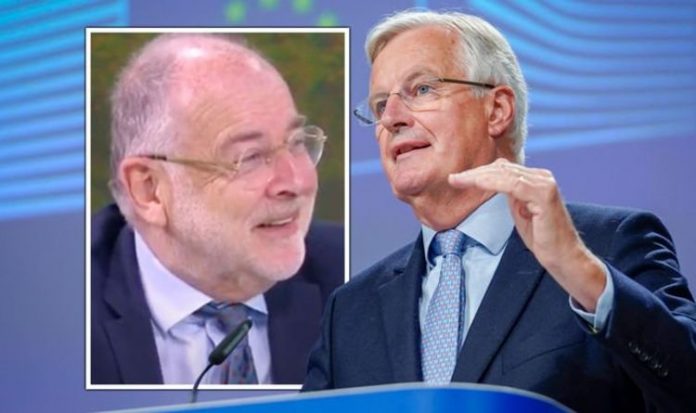 During an interview with Sky News’ Adam Boulton, Lord Falconer analysed the possible implications for Britain if the UK Goverment chooses to break international law over the agreement struck with the European Union on the Northern Ireland border. The Labour peer stated that the EU would be powerless if the UK chooses not to honour the terms of the previous agreement but added that Michel Barnier would weary of entering into future agreements with Britain.

Lord Falconer said: “If a Government or a nation breaks international law can it be had up?

“We have agreed to what happens if we break it.

“You are presuming that this reckless law-breaking Government will just ignore all those provisions and assuming that as you’re applying they do ignore those provision, then there is absolutely nothing the EU can do except they will never trust us again.

“I would imagine that Michel Barnier might be saying quite gently today that it is quite difficult to expect us to enter into a new agreement when you’re saying you’re not complying with the old one.”

Chairman of BrexitWatch and former Brexit Party MEP, Ben Habib, urged the Prime Minister to “denounce and be done with” his Withdrawal Agreement.

“There is not a single thing in that withdrawal agreement which is to the UK’s benefit.

“That deal was negotiated when Britain had its back to the wall, when we were effectively in a constitutional crisis.”

The former MEP added: “The Prime Minister’s agreement to it was something he would never have done if he had an outright majority and we weren’t in that sort of crisis.

“Now with the 80-seat majority, recognising that the withdrawal agreement is awful, he needs to exercise maximum political will and repudiate that agreement.

“The Prime Minister should simply denounce the withdrawal agreement and be done with it.”