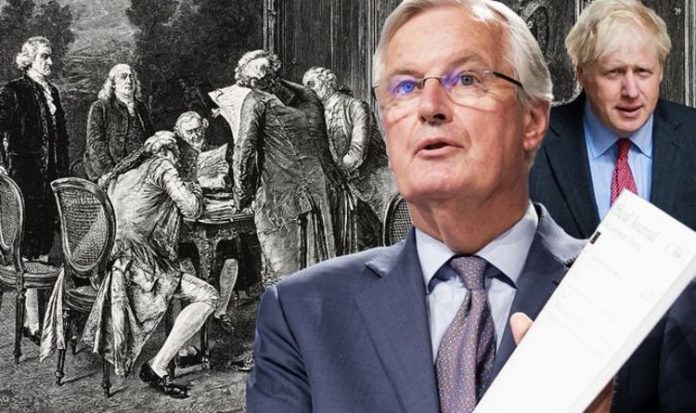 The EU and UK will embark on an intensified final phase of Brexit talks today after Britain agreed to lift its block on negotiations. The breakthrough came after a call between the EU’s chief Brexit negotiator Michel Barnier and his British counterpart David Frost, with both sides agreeing to restart talks. Negotiations had been deadlocked since last week because of Prime Minister Boris Johnson’s decision to demand a “fundamental” rethink from the bloc before allowing further meetings.

Mr Barnier and Lord Frost agreed a 10-point plan for this “next and final phase of the negotiations”, including working through weekends and establishing a “small joint secretariat” “to hold a master consolidated text”.

However, a Downing Street spokesperson said “it is clear that significant gaps remain between our positions in the most difficult areas”.

Mr Johnson had criticised a statement adopted by EU leaders at a summit last week that called on the UK “to make the necessary moves to make an agreement possible”, saying there was no point continuing talks if all concessions needed to come from the British side.

As the clock ticks down, former Conservative MEP Daniel Hannan laid the blame for the current Brexit deadlock on Brussels.

In a recent report, he argued the EU should have followed the same trade strategy adopted by Britain in 1782, instead of treating London as a “dangerous neighbour”.

He wrote: “Colonial powers do not easily relinquish sovereignty.

“Britain was one of the rare exceptions. When, in 1782, it became clear that the Thirteen Colonies were set on separation, London offered terms so generously that the American negotiators, John Adams, Benjamin Franklin and John Jay, could not believe what they were hearing.

“Britain’s calculation, which turned out to be correct, was that, once American independence was a fact, its best interest lay in ensuring maximum trade with its former possessions.”

Mr Hannan noted the EU has not been able to make “an equivalent psychological adjustment”.

If nothing else, he added, lengthy talks served to establish beyond doubt that the EU was not negotiating in good faith.

JUST IN: Sturgeon’s ‘reputation under attack’ as Tories fight to halt SNP

As Mr Hannan claimed, in 1782, a newly-elected British Prime Minister Lord Shelburne saw American independence as an opportunity to build a lucrative trade alliance with the new nation without the administrative and military costs of running and defending the colonies.

As a result, Treaty of Paris terms were very favorable to the US with Great Britain making major concessions.

The treaty, signed by Franklin, Adams and Jay at the Hotel d’York in Paris, was finalised on September 3, 1783, and ratified by the Continental Congress on January 14, 1784.

Regarding the current Brexit talks, the prominent eurosceptic argued that the French position on fisheries – that the UK should be treated as a third country in every other respect, but should remain fully subject to the Common Fisheries Policy – is seen as preposterous by every neutral observer and by most of the EU.

He claimed it does not even make sense in terms of narrow French interests.

Mr Hannan explained: “Britain is offering French vessels a phased and partial reduction in access to our waters, not complete exclusion. But if there is no deal, there will be zero access for French skippers – who currently land 84 percent of all the cod caught in the Channel. Hence the suspicion in some continental capitals that Emmanuel Macron is looking for an excuse to wreck the talks. No French leader, after all, loses votes by bashing the Brits.”

He concluded in his piece for The Telegraph: “An agreed and amicable departure would have preserved the Western alliance and ensured Britain’s continuing support, albeit from the touchline, for the European project. Instead, the EU is treating Britain as, in the recent words of its president, Charles Michel, a dangerous neighbour, comparable to Russia or Libya. While the EU has relations with such states, they go no further than the minimum diplomatic niceties.

“That being so, Britain should annul the withdrawal agreement, which it signed on the basis of a promise that a trade deal would be not only signed but implemented in 2020.

“We should make clear that we will unilaterally guarantee the rights of EU citizens and that we will raise no infrastructure in Ireland, and we should leave it to an international tribunal to work out any outstanding debts.

“For the past year, we have been conducting trade talks with countries on other continents, all of whom are looking uncomplicatedly for a mutually profitable outcome. It is time to turn our faces back to the open main.”