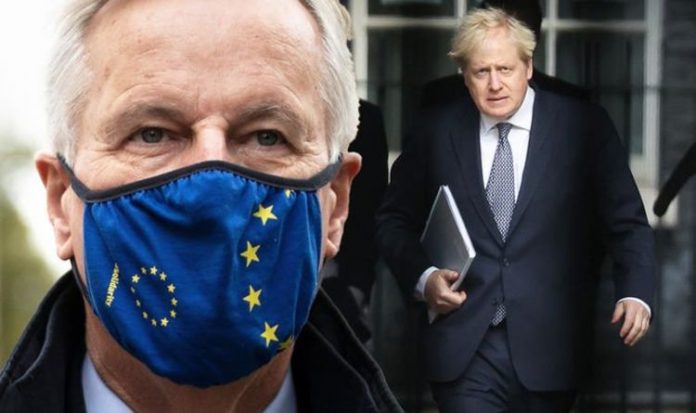 Brexit trade talks concluded in late December, eventually producing a deal, but the political tension has continued nonetheless. The UK and EU are once again debating the Northern Ireland protocol as the country faces difficulties importing goods. Fishing has also remained a contentious issue after the EU banned shellfish imports from the UK, and France clashed with the Jersey government over access to waters. In January, a diplomatic row erupted over the status of the EU’s ambassador to London after Brexit.

The EU’s foreign affairs representative, Josep Borrell, took issue with Britain’s apparent plans to treat the ambassador as a representative of an international organisation rather than giving him full diplomatic privileges.

The EU figure warned Mr Raab that the current arrangement does “not reflect the specific character of the EU, nor do they respond to the future relationship between the EU and the UK as [a non-member]”.

Tory MP Tobias Ellwood condemned the Government, saying that the UK has engaged in “silly spats which will not help strengthen security and trade cooperation. We are better than this”.

The EU’s Brexit negotiator Michel Barnier also sent a stark warning to the Government over the issue.

“I just want to say that it’d be wise for the UK side to find a clever solution for this point.”

Asked what the implications would be if the row continued, Mr Barnier repeated his ominous warning to the UK side.

He added: “I repeat, it would be wise for the UK to make a clever solution.”

Mr Barnier said that time is needed for people and businesses to adjust, and warned the UK not to contradict the protocol.

He said: “I can understand that we need some time to implement correctly some of the provisions of the agreement, we need a time of adaptation.

“But we cannot work in contradiction with the treaty… as we did with the Irish protocol in the withdrawal agreement, despite the threats of the Government, we found concrete solutions for key issues.

“We are prepared to do that, but not in contradiction with the treaty.

“When we speak of the rules of origin, we are speaking of preserving and defending our jobs in the EU, nothing else.”