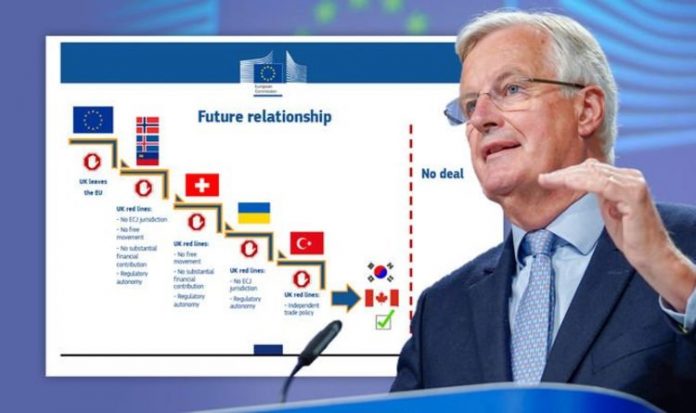 This week, the UK and the EU’s negotiating teams are in Brussels for a crunch round of talks. The UK’s chief negotiator David Frost has already signalled that he will not be deviating from Prime Minister Boris Johnson’s “red lines” amid speculation that the departure of Dominic Cummings from Number 10 could herald concessions. He said there has been “some progress in a positive direction” but admitted there were still “significant” differences between the UK and EU on fishing and the level playing field.

His tone was echoed by Simon Coveney, the Irish Foreign Minister, who said a deal was “very doable” but also “very difficult” and could be scuppered by deadlock over fishing, with the EU demanding 50 percent of the catch in British waters and the UK sticking at 20 percent.

As tensions rise, in a recent report, Lee Rotherham, the former director of Special Projects at Vote Leave, argued there are actually several options available to Brexit Britain that haven’t been considered.

Mr Rotherham claimed that in 2017, a PowerPoint slide by the EU’s chief Brexit negotiator Michel Barnier became an “unexpected icon” of the Brexit talks.

The Brexit strategist claimed it was simple and striking but also wrong.

He explained: “The slide no doubt fulfilled its immediate objective, simplifying things for the politicians that Barnier was trying that day to brief.

“But subsequently applied beyond that, the fag-packet design missed the absolutely huge variety of treaty types on offer, and even miscategorised the options cited.

“At its most charitable, it was at best a picture on a box when the contents were left without the assembly instructions.”

Mr Barnier has persistently asserted that he would never sign up to mini-deals if the main talks break down.

JUST IN: Macron on brink as ‘Brexit poised to end re-election hopes’

However, according to Mr Rotherham, his actual mandate does not forbid him signing up to unambitious arrangements.

He added in his piece for Global Vision: “At this point it’s perhaps worth revisiting the ‘Barnier Stairwell powerpoint’ and correcting it.

“Rather than just half a dozen models of cooperation with the EU, we have now identified 65, falling into seven formats.

“That includes being able to identify an entire category of ‘enabling deals’ precisely designed to act as a peg for grouping together mini deals, though frankly following the Swiss example we would be better off keeping them separate from one another, to keep the Commission honest.”

Mr Rotherham concluded that political commentators should stop thinking in terms of Mr Barnier’s absolutes – his deal or a crash deal – but rather in terms of a sliding scale of deliverable results.

In his updated slide, the Brexit strategist broke down all the different trade deals that have been pursued by the bloc with other countries so far.

Next, there is the group that sits in close orbit, constituting regulatory or customs union, or both.

The third category are those examples where the UK has been aiming for under Mr Johnson.

These are what we might call the “developed trade deals”, keeping trade firmly intergovernmental via FTAs or FTA+s.

Additionally, there are what might be grouped together as baselines behind bilaterals and multilaterals.

Finally, there are what one might term the long spoon arrangements, involving closed or closed-off societies or economies.

With luck, Mr Rotherham argued, Britain may still end up with a deal in the third group.

It is not the first time the European Commission has been accused of publishing a “misleading” slide.

In February, the EU’s negotiating team used a large, red blob to highlight how much of Britain’s trade goes through the EU – but statisticians pointed out that the graphic wildly exaggerated the relative size of Britain’s blob compared to that of other countries and blocs.

The graph showed British trade as vastly greater than that of Canada, for example, with the true disparity much smaller.

A European Commission spokesman said: “The chart was generated with an Excel chart tool, based on data from Eurostat.

“The width of each bubble is proportionate to the total trade of each country.”