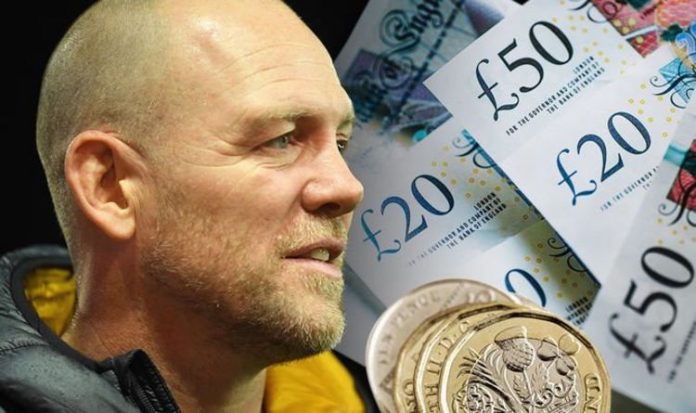 Mike Tindall criticised by host for claiming furlough in pandemic

Mike Tindall is married to the Queen’s eldest granddaughter Zara Tindall, and recently announced that they are expecting their third child later this year. Mike is a former England rugby star while Zara is a successful equestrian with a silver medal from the 2012 London Olympics under her belt. The England World Cup winner was named the fourth-richest rugby player in the world by Ruck Magazine, and is estimated to be worth £15.7million.

However, his company, Kimble Trading Ltd, was revealed to have claimed support from the furlough scheme this week.

Government-published accounts for the year ending on March 31 last year were filed in December and suggested Mike’s company had struggled throughout the pandemic and the subsequent restrictions on events.

The account explained that the company had “taken advantage of all available Government aid in order to support the business and its employees through the crisis”.

None of this financial support went towards Mike and there is no implication of wrongdoing.

However, the royal did hint at his concerns about money earlier this month.

Discussing his 2014 retirement from rugby, he said: “You always worry about money.

“I was very fortunate that I had a couple of ambassadorial roles, so you know there’s money coming in, but sponsorships won’t last forever.

Mike Tindall, husband of Zara Tindall and grandson-in-law to the Queen (Image: Getty)

Mike Tindall is a England rugby star with an estimated worth of £15.7million (Image: Getty)

“You’ve got to plan and now with a third on the way and what’s coming down the line in terms of school bills, fees to pay…”

He also joked about being part of the Royal Family, and claimed it was “something you just get used to” in an interview with The Times.

He continued: “It has its benefits and it has its negatives.

“You think about what you do and you have to be aware of it but it doesn’t necessarily dictate.

Mike with Zara and their two daughters, Mia and Lena (Image: Getty)

Kimble suffered under the pandemic because of its reliance on dinners, speeches and large events which have been off the menu for much of the last year.

It’s not known who the Bath-based business supported through the coronavirus job retention scheme with taxpayers’ money, but furlough is due to come to a close on April 30.

A spokesperson for Mike confirmed that he had not been personally furloughed.

The scheme was extended by Chancellor Rishi Sunak to assist employees — and employers — through the winter months in the wake of the second wave by paying 80 percent of a worker’s salary.

Mike’s father was a regional manager for Barclays, meaning the 42-year-old learnt about financial management from a young age.

Even when he was playing for Bath at just 18, and on a salary of £10,000 per year, he reportedly still contributed to a pension.

Mike meeting the Queen — he is not a working royal and does not receive money from the Sovereign Grant (Image: Getty)

Mike with his cousin-in-law Princess Eugenie and his brother-in-law Peter (Image: Getty)

However, the idea of a royal using a taxpayer-funded scheme has infuriated some members of the public.

The Royal Family would have been “embarrassed” by Mike’s decision, according to commentator David McClure.

As the author of ‘Royal Privilege: The Queen’s True Worth’, Mr McClure explained: “The Royal Family is all about good optics, that’s what they do, it’s all ceremony, it’s all image, it’s all promotion.

Mike and Zara (L) on Buckingham Palace’s bacony for Trooping the Colour in 2016 (Image: Getty)

However, it’s worth noting that although Mike and Zara live with their two children on Princess Anne’s estate, Zara is not a working royal.

Despite being the Queen’s second child and only daughter, Anne decided not to give her children titles so they could live a more normal life away from the expectations of the monarchy.

Both of Anne’s children have sought independent careers away from the Royal Family and do not carry out any public duties, only appearing at the odd ceremonial occasion such as Trooping the Colour.

Therefore neither Zara nor her brother Peter will be supported by the Sovereign Grant.

The news of Mike’s furlough scheme went public shortly after an investigation from The Guardian revealed that the Queen had used the ‘Queen’s consent’ protocol in an attempt to conceal her private shareholdings and wealth from the public in the Seventies.