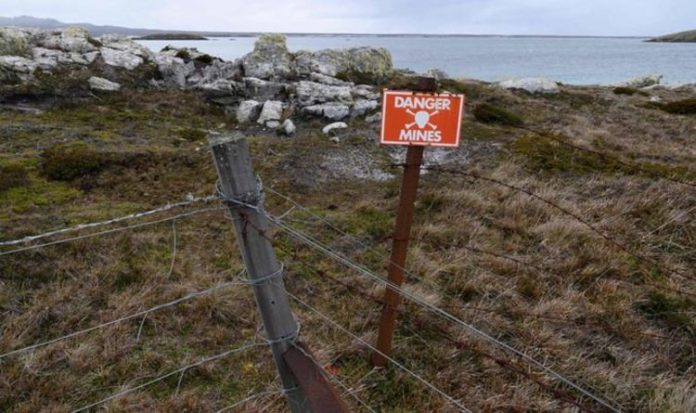 The Foreign Office said the final explosive devices were found near the capital Stanley and the islands will be declared landmine-free in a celebration on Saturday – nearly 40 years after the war. There are now no antipersonnel mines laid on British territories anywhere in the world.

Foreign Office Minister Wendy Morton said: “This is a huge achievement for the islands. We must pay tribute to the brilliant team of deminers who put their lives at risk to make the Falklands safe. Our commitment to ridding the world of fatal landmines does not end with our territories being mine-free.”

Islanders will celebrate the news with a bang, with a raffle winner getting the chance to detonate the final landmine, while the runner-up will cut the fence to officially reopen one of the Island’s beaches to the public.

Jock Sutherland is looking forward to visiting beauty spots on the Falkland Islands that have always been no-go zones since the war in 1982.

The 52-year-old, who emigrated there from Bishopbriggs in 1987, plans to celebrate the historic moment with a party.

Fuel tanker driver Jock said: “All of the danger signs are coming down and the fences are being cleared, and it’s great news for everyone on the Falklands. We are getting the island back.

“Some of the most beautiful spots, that no-one been able to step a foot on for over 30 years, will finally be re-opened.”