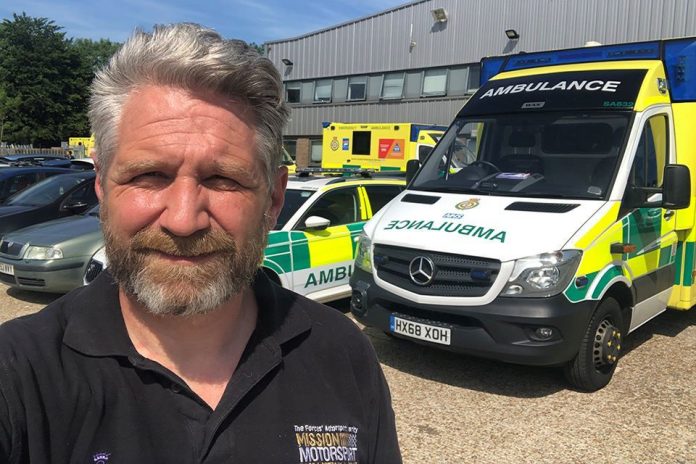 The 2020 Soldiering on Awards recognised many worthy winners including James Cameron, founder of Mission Motorsport, the Forces’ Motorsport Charity.

Over the course of this incredibly challenging year, we have seen many acts of selflessness and compassion across the community, as we have all dealt with the current pandemic. Some of these acts of altruism will not have been visible to the wider community, so it is right that when we do recognise these valiant and humble actions that we acknowledge them.

Last week DRM National Account Manager Tony Matthews caught up (virtually) with James to congratulate him on the award and to discuss the impact of the veteran community since the beginning of the crisis.

Hear what James had to say about the award and what it means to him.

What James had to say about the award.

What James had to say about the award video transcript (ODT, 5.98KB)

While the award recognises James as an example of the veteran communities response efforts, he is quick to point out the impact of the community as a whole and how individuals came together, used their skills and access to equipment to identify the most effective way to contribute.

In particular James recognises the inspirational efforts of a veteran and Mission Motorsport beneficiary Darren Kamara who during the crisis was furloughed from his job within the airline industry. Owning 4 of his own 3D printers, Darren printed and supplied personal protective equipment to where it was needed most in his local community.

Listen to James talk about the inspirational response from Mission Motorsport beneficiaries who quickly mobilised to meet the needs of their local community.

In addition, James recognises the ongoing value Mission Motorsport can deliver through their engagement with the automotive industry.

Practically for a charity that manages relationships in to the automotive industry, it was, how can we help our industry to be able to support too?

With partners such as Jaguar Land Rover and Mazda, Mission Motorsport were able to supply transport where it was needed, helping deliver PPE supplies throughout the country.

In terms of his own personal contribution, James took the opportunity (through an app called SpareHand) to volunteer with the South Central Ambulance Service. While he admits it felt amazing to be able to help others, he also acknowledges the positive impact being able to contribute had on his own mental health.

Finally, James and Tony discussed the overall impact of the Veteran Community and how the response to COVID-19 exemplifies the ongoing contribution veterans make to civilian society.

If you’re wired in a certain way, and particularly if you’ve had that drilled and inculcated in to you, once you’ve stood up to serve, it is very natural to want to stand up and serve again. Our veterans are a national resource and if we allow them to be underemployed… we as a nation are letting ourselves down.