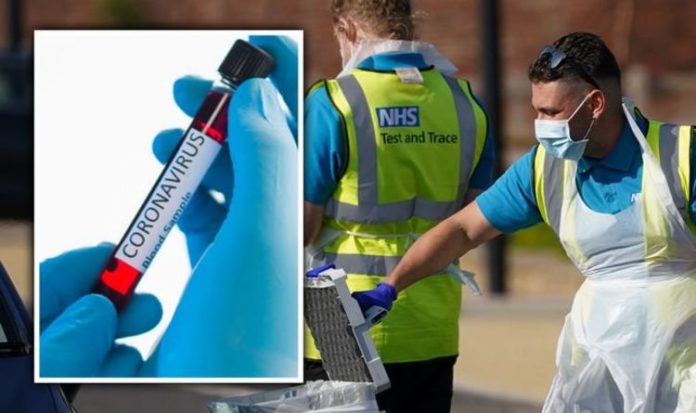 Prime Minister Boris Johnson announced plans to increase coronavirus testing dramatically in the future, with millions of people being tested each day. It is the Government’s hope that a new mass testing programme, which could provide COVID-19 test results in around 20 minutes, will help businesses return to near normal operations. The ambitious testing programme been dubbed ‘Operation Moonshot’.

In recent weeks the NHS Test and Trace service has struggled to deal with the increasing demand for tests.

But the Government has hopes millions of people will be able to be tested on the spot for coronavirus around the start of next year.

Mr Johnson said earlier this month: “In the near future we hope to start using testing to identify people who are negative, who don’t have coronavirus, who are not infectious.

READ MORE: Matt Hancock hits back at claims test and trace is still a farce

However a senior figure in the UK’s fight against coronavirus has suggested it may be up to businesses to foot the bill for the service.

According to iNews, Head of NHS Test and Trace Baroness Dido Harding told members of the CBI business group it could be the “cost of doing business” to carry out these tests.

She also suggested the tests would not be part of NHS Test and Trace, which is currently focused on swab testing for those with symptoms of the virus.

She said: “For that sort of test that may be a normal cost of doing business to be able to have non-socially distanced activities, but that’s different than for symptomatic people who should always feel like they can come to an NHS service.”

Since Mr Johnson announced the plans for Operation Moonshot, it has come under criticism from experts.

Dr Chaand Nagpaul, council chair of the British Medical Association (BMA), said it is unclear how Operation Moonshot would work given the “huge problems” currently seen with lab capacity.

Dr Nagpaul added: “And the notion of opening up society based on negative tests of those without symptoms needs to be approached with caution – both because of the high rate of ‘false negatives’ and the potential to miss those who are incubating the virus.”

Dr David Strain, clinical senior lecturer at the University of Exeter and chairman of the BMA’s medical academic staff committee, said: “The mass-testing strategy is fundamentally flawed, in that it is being based on technology that does not, as yet, exist.”