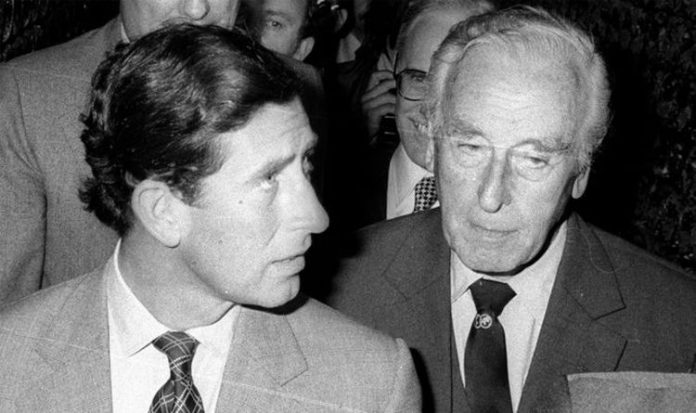 Lord Mountbatten — affectionately known as Dickie — is remembered as the royal stalwart who acted as Charles’ “substitute grandfather”, as well as a paternal figure to Prince Philip. As the Duke of Edinburgh’s uncle, he allegedly helped Philip in his courtship of Princess Elizabeth, who would go on to become the Queen. Dickie’s tragic death has just been pushed back into the mainstream after the incident was retold in season four of fictional Netflix drama, The Crown.

When visiting his home in Northern Ireland in 1979, he was the victim of a fatal Irish Republican Army (IRA) assassination.

The Crown depicts the terrible explosion which saw Dickie, his 15-year-old grandson Nicholas Knatchbull, a teenager who worked on his estate and Nicholas’ paternal grandmother die.

The terrible attack is known to have left the Royal Family completely shaken, and some claim Charles was unable to eat afterwards due to his overwhelming grief.

In The Crown’s retelling of events, Charles is also seen opening a letter after Dickie’s death from his substitute grandfather which reads: “It grieves me to say that you are not working hard enough to reach and to rise.

“The choice of a woman was the issue around which the last Prince of Wales came to grief.

“And it’s astonishing to me that, 40 years after the abdication, you are making so little attempt to conceal your infatuation with another man’s wife.

“How could you contemplate such ruin and disappointment to yourself, to your family, to me?”

Mountbatten’s character advises Charles to build his destiny with some “sweet and innocent, well-tempered girl” which was “his most important task” as a future monarch.

However, this letter does not exist.

Howard Hodgson told Express.co.uk that the portrayal of Dickie in The Crown is misleading.

Lord Mountbatten used to advise Charles on his royal duties and choice of bride (Image: Getty)

He concedes that Dickie did take on the role of Charles’ honorary grandfather, and suggested this was not surprising, as “it’s no secret” that the heir struggled to get along with either of his parents.

Yet, Mr Hodgson explained how all the characters “are over exaggerated, because nobody is one two-dimensional cardboard cut-out”.

He continued: “Mountbatten was not as kniving as the show makes out, the letters [that he did write] are all there — and he certainly did not write the letter in The Crown.

“He did have his own agenda, he did want Charles to marry his own great-niece, and in fact Charles would have married her but she turned him down.”

Amanda Knatchbull, now Lady Ellingworth, was reportedly put off at the thought of having to dedicate herself completely to the Palace without much autonomy.

Mountbatten talking to the Queen — he spent years on the edges of the Royal Family (Image: Getty)

Charles and Mountbatten were thought to get along exceptionally well (Image: Getty)

The show’s creator, Peter Morgan, did admit on the show’s official podcast that the concept of the letter was based on “what I really believe, based on everything I’ve read and people I’ve spoken to” rather than an actual note left to Charles by his great-uncle.

Indeed, Dickie did famously tell Charles that he should “sow his wild oats” and play the field during his Twenties, before settling down with a blue-blooded virgin who would be able to support him in his royal life.

The Prince of Wales then obediently followed his great-uncle’s advice when he chose Lady Diana Spencer to be his wife, two years after Dickie’s death.

This is not the first time Dickie’s actual influence has been called into question.

Author Andrew Lownie wrote in his biography, ‘The Mountbattens’: “Was [he] one of the outstanding leaders of his generation or a man over-promoted because of his royal birth, high level connections, film star looks and ruthless self-promotion?”

Dickie was, after all, instrumental in attaching Mountbatten to the official Windsor surname.

Yet, Mr Lownie continued: “He was always writing himself into the script.

Mountbatten took Charles under his wing because the royal struggled with both of his parents (Image: Getty)

The Royal Family tree — Mountbatten was an uncle to Philip and a great-grandson to Queen Victoria (Image: Express.co.uk)

“He always thought that he was helping the Royal Family and the courtiers. He had a strong sense of entitlement and saw himself as a fixer.”

Indeed, Charles once called his mentor “a fifth columnist who makes a show of being a great ally” during a tiff over the heir’s hunt for the perfect wife.

The Crown, on the other hand, suggests the Royal Family often bent to Charles’ will.

Season three examines the reports that Dickie and the Queen Mother may have helped break Charles and Camilla Shand — now Camilla, Duchess of Cornwall — up when they were first dating in 1972.

However, in reality, Camilla decided to wed her former flame Andrew Parker Bowles while the Prince of Wales was away for several months with the Royal Navy.

Dickie’s meddling ways were also called out by Prince Philip when he was still trying to woo Princess Elizabeth.

He told his uncle that he feared his potential bride “would not take” to the idea of Dickie’s interference “quite as docilely as I do”.