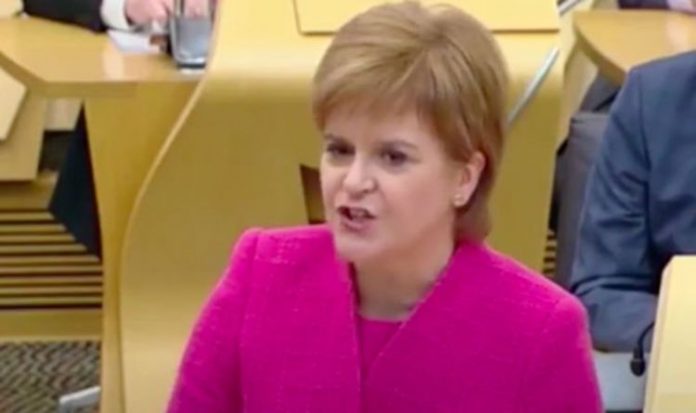 Burntisland Fabrications (BiFab) confirmed its administration, putting hundreds of jobs at risk, after the Scottish government refused to provide more funding and ruled out nationalisation. The company’s administration comes as it failed to secure any new contracts and despite previously receiving a £52million bailout from the Scottish government.

And now Ms Sturgeon has been mocked with her own words after Twitter users unearthed a video where the Scottish First Minister passionately told Holyrood she had previously saved BiFab from administration.

She said: “Leonard was having wee photo shoots outside BiFab. I was actually making sure that we saved that company from administration.”

Her comments were in reference to when the Scottish Government rescued the firm, which has plants in Fife and Lewis, back in 2017.

Scot Fax tweeted the video alongside the caption: “Well this is totes awks.”

While BBC presenter Andrew Neil simply tweeted the video alongside: “‘That company is now in administration.”

Canada-based DF Barnes bought the business in 2018 but said it was “not an investable company at the time” and it was understood the Scottish Government would be the “primary financiers”.

The firm had been preparing to put up to 500 employees back to work on a wind turbine scheme when it emerged ministers could no longer provide the necessary financial support.

A £2 billion deal subsequently collapsed to manufacture eight turbine jackets at its yard in Methil as part of the Neart Na Gaoithe (NnG) project.

The Scottish Government previously bailed out the company (Image: GETTY )

A statement from the company said: “BiFab can confirm that the board has agreed to place the company in administration following the Scottish Government’s decision to remove contract assurances.

“However the absence of supply chain protections in Scotland and the wider UK have consistently undermined our ability to compete with government-owned and government-supported yards outside and inside the European Union.

“We would urge the Scottish and UK governments to address these structural challenges as a matter of urgency in order to ensure that the benefits of offshore renewables are shared more widely with communities across the country.”

The Scottish Government has argued state aid rules prevent it from bailing the company and it ruled out nationalisation.

BiFab’s administration comes as it failed to secure any new contracts (Image: GETTY )

But both Holyrood and the UK governments faced strong criticism from unions, accusing them of a “failure”.

GMB Scotland secretary Gary Smith and Unite Scotland secretary Pat Rafferty said in a joint statement: “BiFab’s administration exposes the myth of Scotland’s renewables revolution, as well as a decade of political hypocrisy and failure in Scotland and the rest of the UK.”

Economy Secretary Fiona Hyslop has committed to working with administrators and trade unions to find a new future for the company’s yards.

She said: “I know this will be an extremely worrying time for BiFab’s workers and we will continue to do everything in our power to support them and stand ready to work with any company interested in taking on the yards.

“The Scottish Government has been working for more than three years to support BiFab through the financial difficulties it has faced and remains committed to securing a future for the yards and the workforce.

“As a minority shareholder, we have been exhaustive in our consideration of the options available to us to support BiFab.

“We will now work with the administrators and trade unions to secure a new future for the BiFab yards in Fife and the Western Isles, helping ensure they are able to diversify and compete in this competitive market.”

When asked about BiFab during First Minister’s Questions in Holyrood on Thursday, Ms Sturgeon said: “I deeply regret and I’m deeply disappointed by this morning’s developments.