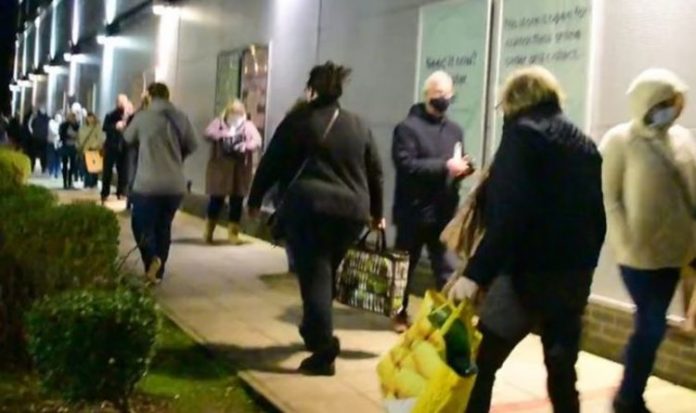 In the footage from the M&S store in North Tyneside, shoppers can be seen queuing in single file and wearing masks. The footage, which was taken at 7am on Tuesday morning, shows the long queue stretching around the entire outside of the Marks and Spencer shop.

On Monday it was announced that Marks and Spencer had introduced a new method of payment in order to reduce queues at its stores.

Helen Milford, M&S Stores Director said: “Throughout the year our teams have done a fantastic job of adapting quickly to serve our customers through challenging and changing circumstances.

“In preparation for Christmas, we have put in place extensive measures to make shopping quicker, easier and safer for everyone — from our longest ever opening hours through to digital queue busting solutions such as our new ‘Pay with Me’ — now in over 200 stores.

“In these final few days we’re focused on delivering for our customers to help them make the most of their Christmas, however they might be celebrating.”

Many Christmas shoppers have taken to social media to share their experience of queues in the run-up to Christmas.

One Twitter user said: “Went out this morning at 6.30am as have a busy day ahead, Morrison’s butcher laughed out loud when I asked about Turkeys and said had none yesterday and none today!

“Went to M&S and was greeted with an hour queue to get even in the shop.”

Another tweeted: “While online, I noticed that M&S opened at 7am today. I thought I’d quickly pop over as nobody would be there. Nope, there was a queue going round the corner.”