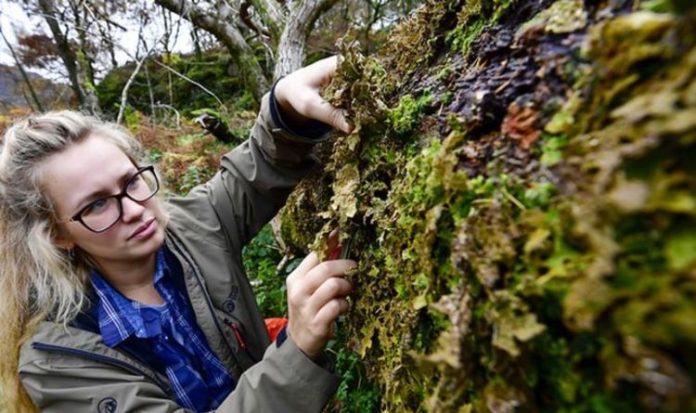 Lungwort lichen has traditionally been an indicator of a healthy woodland. But the frilly, greenish-gold lichen has become increasingly rare in England since the 18th century because of air pollution and loss of habitat.

In the Lake District it exists in only a handful of sites, including on a veteran oak tree in Borrowdale which formed what is thought to be the single largest community of the species in England.

The tree, thought to be between 200 and 300 years old, blew down in storms and the lichen would die if it was left, conservationists said.

A team has carefully removed a large patch of lungwort from the oak and reattached it to new trees using wire mesh, staples and eco-friendly glue, while rubbing its reproductive parts on bark to help it survive.

It has been “translocated” to dozens of trees to give it the best chance of survival.

Maurice Pankhurst, woodland ranger at the National Trust, said: “Just as an art gallery would protect its collection of rare paintings, it’s essential for us to protect these rare species.”

April Windle, from Cumbria Lichen and Bryophyte Group, who championed the translocation, said: “We hope the lichen will eventually attach, become independent and reproduce.”

She said lichens – which photosynthesise, regulate water and carbon cycles, provide food for invertebrates and nesting material for birds – “are such amazing lifeforms and play such a fundamental role within these woods”.

She said certain lichen can indicate a habitat’s health and give an early warning of environmental changes.