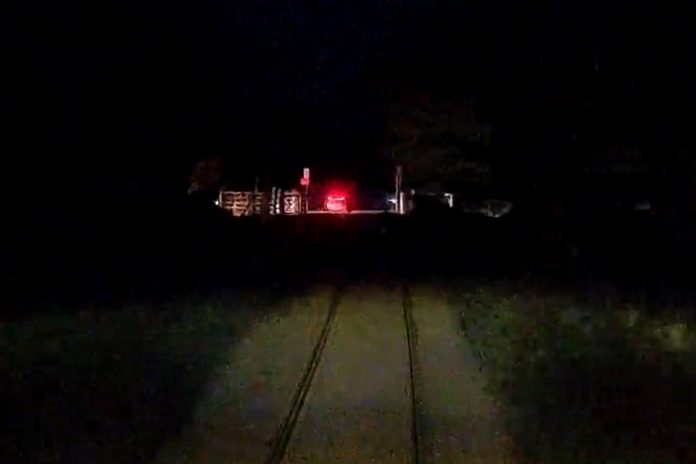 At around 17:21 hrs on 21 January 2021, a passenger train narrowly avoided colliding with two cars at Coltishall user worked crossing, near Norwich. At the time of incident, the crossing, which is on a public road, was seeing higher than normal levels of road traffic due to the temporary closure of a nearby main road.

CCTV evidence shows that the first car cleared the crossing around three seconds before the train passed and that the second car, which was approaching the railway from the same direction as the first, stopped clear of the crossing as the train approached. No one was injured and no damage was caused by the incident.

Coltishall user worked crossing is fitted with telephones. Vehicle users are directed by signs to use these telephones to obtain permission from the signaller before opening the crossing gates and crossing the railway. RAIB has been unable to find any evidence that a request to use the crossing was made by the drivers of the cars involved in this incident.

Our investigation will aim to determine the sequence of events that led to the incident. It will consider how the crossing was being managed by Network Rail, including how risks associated with a user worked crossing on a public road were assessed and mitigated. It will also consider the presence of user worked crossings on public roads more generally and any other relevant underlying issues.

Our investigation is independent of any investigation by the railway industry or by the industry’s regulator, the Office of Rail and Road.

We will publish our findings, including any recommendations to improve safety, at the conclusion of our investigation. This report will be available on our website.

You can subscribe to automated emails notifying you when we publish our reports.