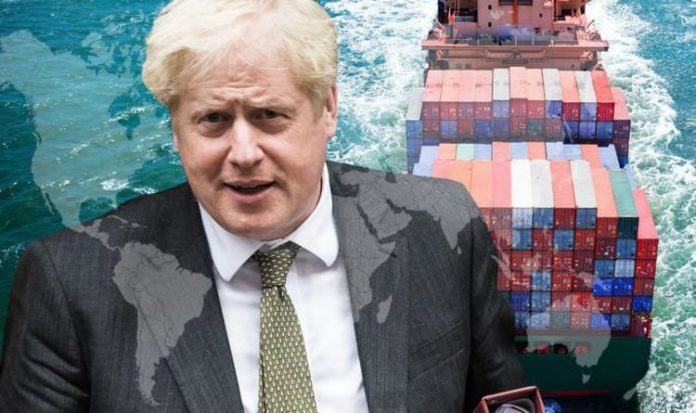 International trade secretary Liz Truss on Friday closed her 57th trade deal with another country as foreign governments line up to capitalise from Brexit with the world’s fifth largest economy. While EU bosses in Brussels have pushed Britain towards no deal, the 57 agreements with other countries made over the last two years are already worth £193 billion a year. The unprecedented success is underpinned by the fact that no other country has ever negotiated so many trade deals simultaneously.

Following the latest deals with Singapore and Vietnam on Thursday and Friday, an ally of Ms Truss told day Express: “We’re doing more simultaneous trade negotiations than any other country in living memory – and we’re delivering. In eighteen months in the job, Liz has become one of the world’s most respected trade ministers. She’s fought really hard for Britain and shown she can get the job done.

“What she’s doing is giving the UK trading options. No matter the outcome of the EU talks, we’re showing Britain can deepen ties with nations beyond Europe and succeed as an independent trading nation.”

While many of the deals are continuity agreements to continue arrangements with the EU almost all of them have a clause which will see the UK and other country work on an improved agreement.

Others like the Japan deal are specifically tailored to the UK market and have opened up the possibility of the UK joining the world’s fastest growing trade bloc the Trans Pacific Partnership.

Since the Transition Period began, Britain has expanded the ambition of its programme above and beyond this original scope, securing agreements with Japan, Vietnam and Singapore, which together accounted for £53bn of UK trade in 2019.

Ms Truss said: “As the UK establishes itself as an independent trading nation, we must embrace new partnerships with dynamic countries like Singapore.

“This deal not only locks in billions of pounds worth of trade, but provides new opportunities for UK businesses and paves the way for a new digital partnerships and UK membership of the Trans-Pacific Partnership.

“Our ambition is to place the UK at the centre of a trading network with nations across the Asia-Pacific and the Americas and a global hub for services and technology trade. Together we will fight against increased global protectionism, champion free and fair trade and drive economic growth around the world.

“In under two years we have agreed trade deals with 57 countries that account for £193bn of UK bilateral trade. This is an unprecedented achievement and merely signals the start of our ambitions for a truly global Britain.”

Meanwhile, the UK has used its new found freedom from the EU to try to break the impasse between the USA and Europe in a trade war.

By leaving the EU, Britain has been able to unilaterally end punishment tariffs in a bid to encourage America to reciprocate.

The EU have protested about the move, but a Department of International Trade source said: “We absolutely do have the right to put tariffs on the US as part of the Airbus/ Boeing, and we have a clear strategy in place.

“We’re suspending tariffs to bring the US to the table and to a negotiated resolution (to try and protect our Scotch whisky industry in particular).

“If the US doesn’t play ball, we’ll put tariffs on. What we ultimately want is a deescalation of the whole dispute. It’s unnecessary between two close allies – we want to draw a line under the issue so we can move our trading relationship forward with the US.”