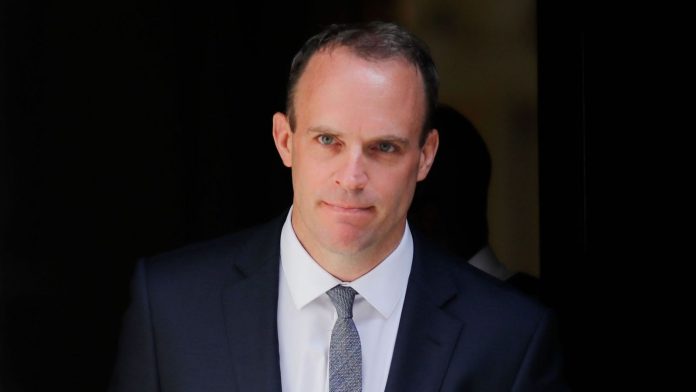 New Brexit secretary Dominic Raab faces a baptism of fire as he presents a government blueprint on Theresa May’s Chequers deal to MPs in the Commons.

The deal has already led to the resignation of his predecessor David Davis and Boris Johnson from the cabinet, as well as a handful of junior ministers and Conservative Party vice chairs.

It has also prompted Brexiteer Tory MPs led by Jacob Rees-Mogg to table amendments to the Government’s Customs Bill which could kill off the prime minister’s Chequers proposals.

And in another challenge to the PM, hardline Tory Brexiteers also plan to try to force her to publish a rival plan drawn up by Mr Davis in the run-up to Chequers, which they claim Downing Street ditched.

But Mr Raab insists the government’s white paper on the deal – which ministers claim is its most significant Brexit publication since the EU referendum – proposes a “principled and practical Brexit”.

“We need to rise to the challenge and grasp the opportunities.”

The long-delayed white paper, entitled The Future Relationship between the United Kingdom and the European Union, sets out the Brexit plans agreed by the cabinet at Chequers last Friday.

The government claims it delivers the right balance between rights and obligations – it will see the UK leave the single market and the customs union and take back control of borders, laws and money.

“In line with our modern industrial strategy, this government is determined to make sure the UK is ready to lead the industries of the future and seize the opportunities of global trade.

“At the same time, we need to cater for the deeply integrated supply chains that criss-cross the UK and the EU, and which have developed over our 40 years of membership.”

Mr Raab, a lawyer who was promoted to the cabinet from the middle-ranking post of housing minister, claims the plan outlined in the white paper delivers this balance.

“It would take the UK out of the single market and the customs union,” he writes.

“It would give the UK the flexibility we need to strike new trade deals around the world, in particular breaking new ground for agreements in services.

“It would maintain frictionless trade in goods between the UK and the EU through a new free trade area, responding to the needs of business.

“It would deliver on both sides’ commitments to Northern Ireland and Ireland, avoiding a hard border without compromising the EU’s autonomy or the UK’s sovereignty.”

Despite Brexit rebels dismissing the government’s claims about the Irish border, Mr Rabb insists this is the right approach, for both the UK and for the EU.

“Alongside this unprecedented economic partnership, we also want to build an unrivalled security partnership, and an unparalleled partnership on cross-cutting issues like data, and science and innovation,” he writes.

“And to bolster this co-operation, we will need a new model of working together that allows the relationship to function smoothly on a day-to-day basis, and respond and adapt to new threats and global shifts while taking back control over our laws.

“The white paper details our proposal in all of these areas, setting out a comprehensive vision for the future relationship.

“It is a vision that respects the result of the referendum, and delivers a principled and practical Brexit.”

Outlining the white paper’s aims, a Brexit department source added: “At its core is a proposal for a free trade area for goods that ensures continued frictionless access at the border, protects jobs and livelihoods and ensures the UK and EU meet their shared commitments to Northern Ireland and Ireland.

“As part of the plan, the UK will have the flexibility it needs to set its own tariffs for trade with the rest of the world, and lead a global charge to open up services markets across the globe.

“Together with an unrivalled security partnership and continued co-operation in cross-cutting areas like data and science and innovation, the white paper honours the result of the referendum, and provides further impetus for the negotiations.”