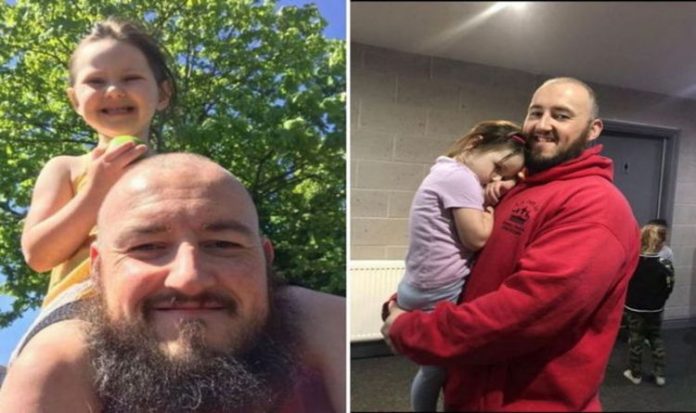 On February 1, Dan arrived at Sarah’s house with daughter Phoebe and was complaining he had chest pains. He took a tablet for heartburn, but within 15 minutes he suffered a seizure and stopped breathing.

Panic-stricken Sarah gave her brother CPR to try and revive him, but he died less than 20 minutes after arriving at her house.

Dan’s family have been left devastated after his sudden death. He was a devoted dad to his five-year-old daughter Phoebe and a ‘gentle giant’.

Sarah said: “There are no words to describe it, it’s the worst feeling in the word. He was so big and strong, and so young. You don’t expect a 31-year-old to die of a heart attack.”

A post-mortem examination found that Dan had an arterial blockage, but there had been no symptoms until minutes before his death. Doctors said that there would have been a 12 to 13 percent chance of surviving a blockage in that area.

Dan was from Westerhope in Newcastle. He was living in Cramlington to be closer to Phoebe at the time of his death.

Dan was known for his big blue transit van, the only vehicle he could fit in due to his 6ft 3ins height and wide frame. Sarah said: “He had to duck to go through doors, and he was so strong- he could pick up a freezer and walk around the house.

“He was a gentle giant, he loved kids. I have two young children and they could not have asked for a better uncle. My little boy is four, and he opens his window every night so he can sing a song to his uncle Dan.”

The family have started a fundraiser page to help pay for the cost of Dan’s funeral which is due to take place on February 22. All leftover funds will go to Phoebe.