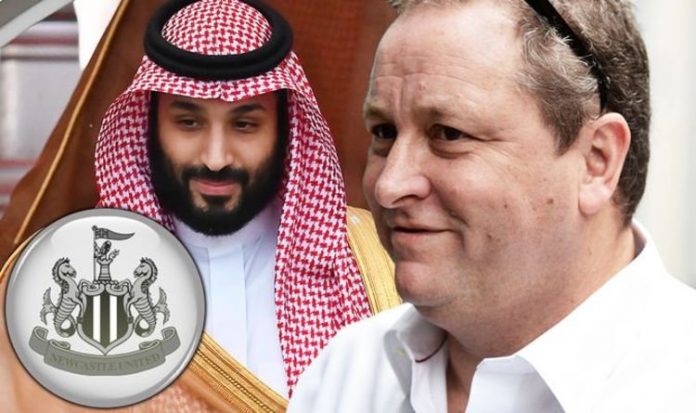 Newcastle United’s hopes for a Saudi-backed consortium’s takeover have fallen short after the group ended its bid to buy the club. The group, which included Saudi Arabia’s sovereign wealth fund PIF, PCP Capital Partners and Reuben Brothers, had agreed a £300m deal to buy the club from Mike Ashley in April. The deal was still being scrutinised under the Premier League’s owners’ and directors’ test, which determines whether a buyer is capable, for example, financially, of maintaining a club into the future.

However, it appears the PIF ran out of patience and, last week, pulled out of the deal.

Kieran Maguire, a football finance expert, talked to Express.co.uk while the deal was still in the offing.

A complex process, entwined with not only football but a bit of geopolitical tension, Mr Maguire said the Saudis would be “upset” should anything go wrong in their acquiring of the club.

Citing myriad reasons, he said one of the main controversies rested with Saudis alleged involvement with the pirate TV station, BeoutQ, which it categorically denies having involvement with.

Newcastle takeover: The Saudi Arabia-backed acquisition of the club has collapsed (Image: GETTY)

Newcastle United: Many fans of the club were positively anticipating the takeover (Image: GETTY)

He explained: “The Premier League has tried to take this up with the Saudi authorities who have denied it.

“The geopolitical war taking place between Qatar and Saudi is itself manifesting in the unfolding sports question.

“While the Qatari-owned Bein sports is losing money as a result of BeoutQ, which is located in Saudi, broadcasting the games for a much lower rate, the Saudi government is saying ‘nothing to do with us, guvnor’.

“The Premier League is really in the horns of a dilemma: if it approves Saudi, then the Qatari authorities would be upset, and they’re a broadcast partner; but if it rejects it, the Saudis are also going to be extremely upset.

Saudi takeover: Amanda Staveley was at the head of the purchase with PCP Capital Partners (Image: GETTY)

“Ultimately, this has less to do with football and more to do with the Middle East and geopolitics; you can’t win.”

The deal appeared to stall at every possible stop during the buying process.

Much of the wavering came amid controversy surrounding Saudi’s long-standing record on human rights abuses, with Amnesty International raising concerns over the potential for “sportswashing”.

The most recent case is centred on Jamal Khashoggi, the investigative journalist who was murdered in Istanbul in October 2018.

Much speculation over the perpetrators has floated.

In December 2019, the kingdom sentenced five of its own people to death, jailing three others.

It said it was part of a “rogue operation” carried out by Saudi agents.

Then, in March, Turkish authorities charged 20 Saudi suspects over the murder – with Western intelligence agencies accusing Crown Prince Salman having ordered the killing which he has denied.

In human rights terms, this poses an interminable question over the legitimacy of Saudi dealings with UK businesses.

However, on this, Mr Maguire said the human rights abuses, when taken into consideration of the Premier League’s owners’ and directors’ test, will likely not take “precedent”.

Newcastle football club: It is unclear how likely, if ever, the deal will be salvaged (Image: GETTY)

Meanwhile, Mr Ashley is said to be personally trying to resolve the situation and is, according to Sky News “100 percent committed to finding a way to get the takeover back on”.

The process has entered UK politics, with MP for Wansbeck, Ian Lavery, one of the 40 MPs who wrote to the Premier League last week demanding an explanation as to why the takeover failed.