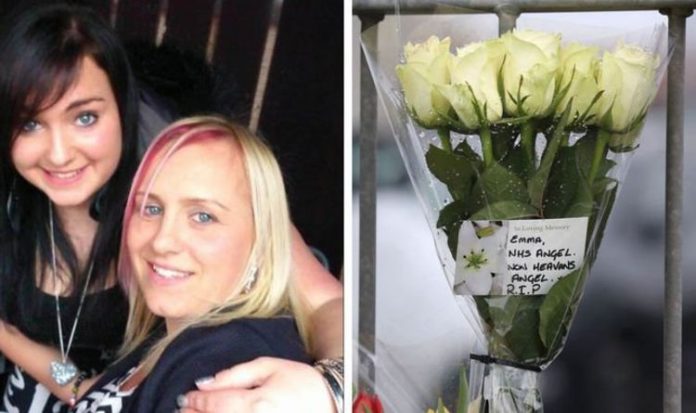 NHS worker Emma Robertson Coupland, 39, died in a frenzied attack outside Crosshouse Hospital in Kilmarnock, Ayrshire. Daughter Nicole Anderson, 24, was knifed 20 minutes later. She was less than two miles away near the takeaway where she worked. The man suspected of both stabbings then crashed his car 45 minutes later at around 8.30pm on Thursday. His vehicle was found 12 miles south of Kilmarnock on a minor road where the 40-year-old driver was pronounced dead at the scene.

He has been named locally as Emma’s ex-partner, Steven Robertson.

The carnage sparked a major armed police response. The hospital was locked down, with ambulances diverted and patients and visitors told to stay away.

Detectives later said the three incidents were linked and no one else was being sought. It is being treated as a suspected double murder-suicide.

Emma was found injured in the hospital car park where she died.

Nicole was rushed to Crosshouse but she too lost her fight for life. Police Scotland’s Chief Superintendent Faroque Hussain said: “A number of locations remain cordoned off as officers continue to conduct inquiries.

“We are working to confirm the full circumstances of what has happened. If anyone has any information which could assist our inquiries, please do contact us.

He added: “I would like to reassure people that there is no wider threat to the community.”

Scottish Deputy First Minister John Swinney said: “A tragedy like this would be impossible to understand at any time, but after the events of the past year it is particularly shocking that such an incident has taken place at an NHS hospital.

“For now I simply want to thank the police officers and all of the medical staff who were involved in the response to this incident for all that they contributed and to express my sympathy to the staff of the hospital for the trauma to which they are having to come to terms.

“And again I want to send my deepest condolences to the family and the friends of those who have been killed.”

First Minister Nicola Sturgeon tweeted: “Dreadful news. My thoughts are with the bereaved.”

Number 10 said: “The Prime Minister’s thoughts are with all those involved and he thanks the police and the healthcare staff for their response.”

NHS colleagues of Emma left floral tributes at the hospital.

Emma’s sister wrote on social media: “I am totally broken. My God this can’t be happening.

“You’re my only sister, my first niece. Please man tell me I’m dreaming.”

The post read: “So glad I have all these memories with you. You’ll never know how much you mean to me.

“I will love you till the end of time my darling. I will miss that beautiful smile, that wee gorgeous person inside and out.

“You made me the happiest person on this planet daily, until we meet again baby I love you. Sleep tight princess.”

The crash occurred on the C50 road near Auchinleck. Yesterday the car was on the grass verge under a tarpaulin. The area was sealed off as forensics officers worked, while roads in Kilmarnock town centre were also closed.

John Burns, NHS Ayrshire and Arran chief executive, added that following the tragic incidents “our thoughts are with all the families and individuals affected by these events”.