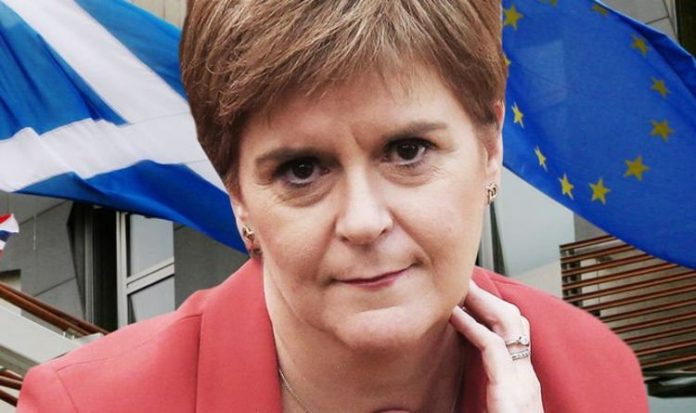 First Minister Nicola Sturgeon attacked Prime Minister Boris Johnson‘s Brexit deal with the EU as the “worst negotiating outcome in history” today. The SNP leader has said her party will oppose the trade agreement despite the risk of a no deal Brexit. She wants to take an independent Scotland back into the EU, and a consent motion issued by the Scottish Government will ask for closer ties with the bloc. The document, seen by Express.co.uk, says: “The Scottish Government continues to believe that the best future for Scotland is to become an independent country and Member State of the EU.”

The motion says the Scottish Government will argue “constructively for the UK to have a more beneficial relationship short of full membership with the EU”.

Ms Sturgeon’s plans have caused fear for some in Scotland as experts have warned leaving the UK could cause disruption, and that joining the EU may take time.

This is something even the First Minister herself admitted in 2017.

She said that “by necessity”, in the event of a vote to break-up the UK, Scotland might have to pursue membership of the European Free Trade Association (EFTA), whose members include Norway and Iceland, before achieving full EU membership.

Ms Sturgeon described this as a “phased” approach, meaning membership of the EU wouldn’t necessarily be an immediate guarantee.

She added: ”If Scotland is independent our position always has been, as long as I’ve been in the SNP and continues to be, that we want Scotland to be a full member of the European Union.

“We have to set out, if we’re in an independence referendum, and we’re not in that right now, the process for regaining or retaining, depending on where we are in the Brexit process, EU membership.

He called a point of order, usually used to highlight inaccuracies, to promote independence during the Prime Minister’s statement.

Speaker Lindsay Hoyle was forced to step in, accusing the SNP leader of deliberately abusing the point of order rule to make a point unrelated to the trade deal debate.

He said: “As the leader of the SNP knows, it is not a point of order.

“I’m desperate to know what he has to say in his contribution, rather than use it up now, why doesn’t he just save it so we can get others in?”

The SNP recently received encouragement from Belgian MEP Philippe Lamberts, who told Express.co.uk this month that Scotland could definitely join the EU.

Mr Lamberts said: “Yes, the answer is a definite yes.

“There would be no obstacle for Scotland joining if the UK is no longer in the EU.

He even tipped Ms Sturgeon as a future candidate for European Commission President.

Mr Lamberts continued: “Nicola Sturgeon comes across as a genuine person, politically astute and someone whose word can be trusted, whereas Boris Johnson comes across very quickly as someone you can’t trust.