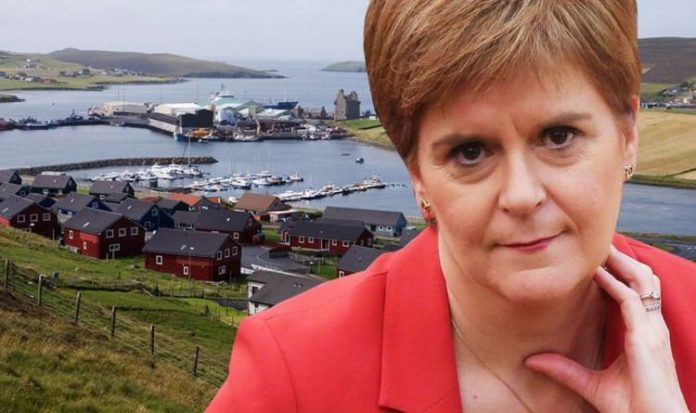 Stuart Hill, who believes the islands have never belonged to Scotland or Britain, blasted the Scottish National Party (SNP) and its leader, Nicola Sturgeon, as he rallied for an independence referendum. He told Express.co.uk residents on the Shetland Islands are “more capable” of running the community than “by diktat from Holyrood or Westminster”.

He said: “My research shows that Shetland is already independent, but most people here will not accept that because they have been brainwashed into thinking that Shetland is part of Scotland and accepting my position involves challenging sovereignty.

“The current movement will, I expect, be asking for powers before ensuring that those they are asking have the powers to give them.

“It is my expectation that the Shetland community will move as one when they are comfortable to do so.”

The Shetland and Orkney independence campaigner said Ms Sturgeon was “not much liked” on the islands and as the First Minister ploughs ahead with her own desperate plans for a second Scottish independence referendum in the wake of Brexit it was “inevitable” residents on the rugged archipelago would feel the same.

Nicola Sturgeon has been delivered a blow over the Shetland Islands (Image: GETTY)

Stuart Hill said Nicola Sturgeon is “not liked much” on the island (Image: GETTY )

The Englishman has been campaigning over constitutional matters since he arrived in Shetland in August 2001 after his boat capsized around 50 miles west of the isles.

He wants the Shetlands and Orkney to have their own own flag, currency and stamps.

The power struggle is engulfed around the islands, which land more fish than ports in England, Wales and Northern Ireland combined.

Mr Hill said: “Shetlanders are much more capable than they give themselves credit for and would be able to run this community better to the satisfaction of its members than by diktat from Holyrood or Westminster.

“According to official figures, far from being dependent on Scotland or the UK, we subsidise the UK by £76 million per year – before you take account of the oil, which, even in these times, dwarfs that figure.”

The Shetlands were the only part of Britain, along with the Western Isles of Scotland, that voted against EEC membership in a 1975 referendum.

During Scotland’s 2014 independence referendum, the unionist vote in the Shetlands was 63.7 percent – one of the highest levels in Scotland.

However, Mr Hill insisted now is the time to seek independence from Scotland and the UK.

A campaign for independence is growing on the Shetland Islands (Image: GETTY )

During Scotland’s 2014 independence referendum, the unionist vote in the Shetlands was 63.7 percent (Image: GETTY )

He added: “The Sovereign Nation of Shetland’s strategy is to demonstrate the benefits of independence, attracting people until we become the de facto authority.”

His remarks come after members of Shetland Islands Council approved a motion to begin “exploring options for achieving financial and political self-determination”.

The move could trigger a Shetland Islands referendum to unshackle themselves from Scotland.

Twenty-two councillors backed the motion, which reads: “We believe that Shetland has the wherewithal to have a positive future.

Nicola Sturgeon is desperate to drag Scotland out of the UK (Image: EXPRESS)

“However, in recent times we have seen more and more decision making being centralised and public funding being consistently reduced.

“We are concerned that this ongoing situation is seriously threatening the prosperity, and even basic sustainability, of Shetland as a community.

“In order to look at alternatives to ensure Shetland can reach and maintain its full potential, we, the undersigned, move that: ‘The Shetland Islands Council formally begins exploring options for achieving financial and political self-determination.’”

It appears residents and councillors hope to adopt a similar path taken by the Faroe Islands, which have autonomous status within the Kingdom of Denmark.

Growing frustration over reduced government funding from Holyrood and centralised decision making has triggered the move.