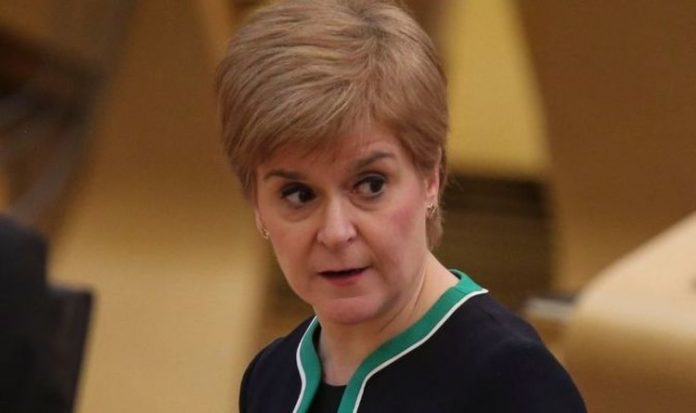 The First Minister hit back at Labour leader Sir Keir Starmer after he announced plans to implement a “constitutional commission” that would spread devolution to all corners of the UK. Branding him it a “constitutional tinker”, Ms Sturgeon said Scottish Labour had no chances of challenging her Scottish National Party’s (SNP) dominance. The majority of Scots now back independence, with the margin increasing between those who say they would vote Yes and those who would vote No in a referendum – the most recent YouGov poll showing a 51 percent to 49 percent split in favour of Yes.

Ms Sturgeon won a historic landslide general election victory north of the border in 2015, winning 56 out of 59 seats.

She and the SNP have since held almost absolute control over Scotland, something which many say has led to “unprecedented” levels of meddling with institutions across the country.

This is especially true of Scotland’s education, which critics say the SNP has begun to manipulate.

Last week, Sir Tom Devine, one of Scotland’s best-known historians, condemned a resource used to teach schoolchildren as a “perversion” of history and “blatant propaganda”.

A timeline of Scottish history, stretching back to 1296, was deleted from Education Scotland’s website this week following the criticism, something teachers were urged to use in their lessons.

Professor Adam Tomkins from the University of Glasgow and an MSP for Glasgow, in a 2015 The Conversation piece, wrote about how the SNP were working to “exert unprecedented controls” on ranging aspects of Scottish life, institutions, and academic freedom.

He said: “With angry mobs descending on the BBC when the broadcaster dares to run news stories critical of the SNP administration, political freedom in Scotland can feel precarious.

“SNP ministers may say they oppose any attempt to alter the UK’s human rights laws but, at the same time, the human rights of Scots are repeatedly jeopardised by SNP policy.

“Very little of this is understood outside of Scotland.

“Poised, elegant and polished – and passionate in her rhetoric and commitment to social justice – Sturgeon is indeed a great performer.

“But underneath the act lies an altogether different reality, of an illiberal and centralising government that would rather sit on its hands than use its powers to transform Scotland for the better.”

Indyref2: Sturgeon has used virtual conferences this year to push the case for an Indyref2 (Image: GETTY)

Holyrood: The Scottish Parliament currently has power given to it by Westminster (Image: GETTY)

Ms Sturgeon and the SNP have also been accused of “failing” scores of young Scots after maths, reading and science all declined in a 2016 set of Programme for International Student Assessment (Pisa) figures.

Ian Murray, the Shadow Secretary of State, in August tore into Ms Sturgeon’s decision to adjust 133,000 students’ examination entries being downgraded from their original prediction.

He said: “In other words, pupils living in deprived areas had their exam results downgraded by more than double the rate of their peers from affluent backgrounds.”

More recently, the SNP were accused of leaving parents “in the dark” over when schools and nurseries will reopen in the New Year.

This was after Ms Sturgeon refused to commit to a date.

Jamie Greene, the Scottish Tories’ Shadow Education Secretary, said Ms Sturgeon had provided “little detail” on why education had been put on hold despite the huge impact on working parents.

Professor Steven Fielding, Professor of Political History at the University of Nottingham, told Express.co.uk the First Minister has managed to get away with a lot of these failures as she has become “very hard to criticise” for a lack of “strong opposition”.

He explained: “Simply, it’s become very hard to criticise her; there are lots of things you could pick which in Scotland people aren’t interested in doing, because it seems as though you’re being anti-Scottish.

Education: Scotland’s education system has been following behind the rest of the UK in recent years (Image: GETTY)

“She’s played a very strong hand very well – but she’s certainly by no means the brilliant leader that many of her supporters think.

“There are lots of questions that could be asked, but at the moment aren’t being asked because she doesn’t have much of an opposition.”