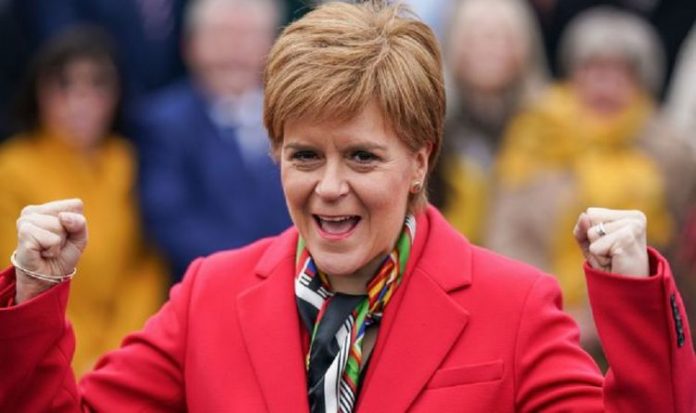 The remarks were made by Douglas Ross, the Scottish Tory leader, during a speech, in which he accused the First Minister of putting her party before the pandemic and the economic interests of the people. Mr Ross went on to challenge Ms Sturgeon to a public debate over her referendum plans. He said: “If she believes that this referendum plan is an essential part of Scotland’s economic recovery from coronavirus, then the First Minister should explain it to the Scottish people.

“The SNP are not holding back. They’ve taken the gloves off and they’re going full-throttle for Indyref2 right now.

“So, let’s not wait for the election.

Mr Ross’ remarks come after the SNP leader published an 11-point “roadmap to a referendum” last week, alongside a newly-formed “independence taskforce”.

The roadmap says an SNP government will legislate for a referendum to be held once the Covid pandemic ends if there is a pro-independence majority in the Scottish Parliament after May’s election.

It also asserts that the party will “vigorously oppose” any legal challenge to this plan from the UK Government.

Recent opinion polls show a majority of Scots in favour of independence.

Sir John also believes that with polls showing the SNP on course for an overall majority in May, the stage seems set for a “significant clash between the UK and Scottish governments” over an independence referendum.