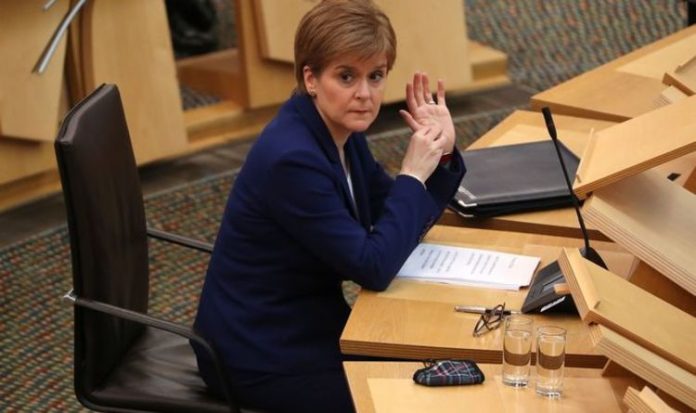 During First Minister’s Questions yesterday, Ms Sturgeon claimed Scotland had a “stockpile of PPE” at the start of the coronavirus pandemic and said they “never once ran out”. But her claims have been attacked by MSP Annie Wells, who accused her of being “caught red-handed” as she shared a whistleblower’s damning account.

The report was shared on Twitter yesterday by ITV’s Scottish correspondent Peter A Smith, in response to Ms Sturgeon’s claims.

He said on Twitter: “This was our @itvnews report: a whistleblower trusted us, we gave her a platform & raised it at the highest level. Credit to the Scottish Gov for acting on it.

“These are strange, worrying times but journalism still must scrutinise those in charge.”

The report claimed a whistleblower paramedic told ITV there had no hand sanitiser and lacked appropriate PPE.

The anonymous paramedic, who had worked for the Scottish Ambulance Service for nine years, also key workers were told to share face visors during the initial outbreak.

She said in March last year: “Up until last week there was respiratory masks but now it’s paper surgical masks.

“We have some face visors but paramedics are told to share them.

“This is just starting and we already have an absolute shortage of essential equipment.

Speaking to the Scottish Government yesterday, Ms Sturgeon said: “It is because we did learn lessons from the swine flu pandemic we had in 2009 and the exercises that were done that we had a stockpile of PPE at the start of this pandemic.

“And as I said earlier on, that’s why we never once ran out of PPE and the early issues we faced in terms of distribution of PPE within the health service we quickly resolved.

“There are to this day, ongoing concerns that we listen to very carefully from staff about the precise nature of the PPE and whether it is adequate to protect them from the virus particularly as we face new variants and our clinical advisers listen to that and discuss that so we can respond as necessary.

“In addition to that, as I already said, we took additional steps to top up the PPE supplies care home providers already had so we have taken all these steps.

“Has everything gone as we wanted? No. We have made mistakes.

“We’ve done things, had we had the knowledge we have done, we would have done differently.”

Ms Sturgeon has been widely criticised for focussing on a second independence referendum rather than the pandemic.

Douglas Ross, leader of the Scottish Tories, said: “That is what the public expect, so you can imagine the sheer outrage that many felt – myself included – when just over a week ago the SNP launched their 11-point plan to deliver another independence referendum.

“Only days before that announcement, Nicola Sturgeon warned us of the seriousness of the situation we continue to face, and our infection rates, hospital capacity and weekly deaths are the close to the highest they’ve ever been.

“In what world is this the right time to be talking about independence and a referendum?”

This week, the First Minister was accused of misleading the public on the coronavirus vaccinations, as the Tories insisted a key target had been missed.