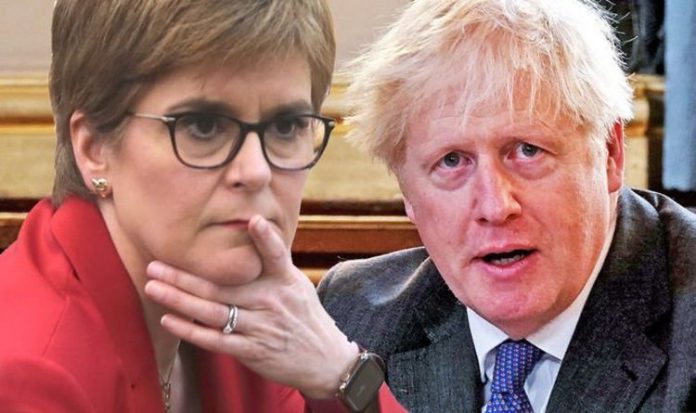 Since the start of 2020, opinion polls have given “Yes” campaigners a consistent lead over their unionist rivals. One recent survey predicted a total reversal of the 2014 referendum result — 55 percent in favour of separation, versus 45 percent against. Much of this swing is tied to Brexit – as Scots feel like they have been dragged out of the European Union against their will.

However, the coronavirus emergency seems to have deepened separatist sentiments.

He said: “The public think that Nicola Sturgeon has handled the coronavirus crisis brilliantly, and they think Boris Johnson has done badly.

As the future of the union looks more uncertain than ever, unearthed reports reveal how Mr Johnson could destroy Scottish separatism forever by following Canada’s example.

Quebec legally organised two provincial referendums – one in 1980 and the other in 1995 – , and both were held after electoral victories by the sovereignist Parti Québécois, which, like the SNP, had renounced its original plan to demand independence as soon as it won power, in favour of the promise that it would consult the population first through the holding of a referendum.

There was a huge turnout, with 94 percent of the 5,087,009 registered Quebecers taking part.

JUST IN: Shetland Islands independence could be dire for SNP

Most French speakers voted for independence but there was a big “no” majority in Montreal, where the bulk of Quebec’s English speakers and immigrants live.

The aboriginal peoples of the province also strongly voted against secession.

Canadian unity was therefore maintained because of the slimmest of margins in the vote.

Surprisingly, that was the last time Quebec sought independence and it was all thanks to the Canadian federal government passing the 2000 Clarity Act.

The Act stated that any future referendum would have to be on a “clear question”.

It also said that any result would have to represent a “clear majority” for the federal parliament to recognise its validity.

In a recent report for The Critic, the Deputy Leader of the Alliance for Unity Jamie Blackett urged the Prime Minister to legislate a similar Act in order to quash separatist feelings.

He wrote: “We pride ourselves on having an unwritten constitution but sometimes these things are better written down for the avoidance of doubt.

“As we now all know, the EU did not allow this omission, possibly that strengthened their union and made it harder to leave but certainly it meant that the Brexit debate was based on known unknowns.

“By contrast the Scottish separatist debate is largely based on unknown unknowns because the rules of secession have never been codified.

“The Canadians had the same issue and, following the Quebecois referenda, passed a Clarity Act in 2000 to establish the rules for any future secession referendum.”

He added: “The Alliance for Unity is now calling on the Government to bring in similar legislation.

“We believe legislative weakness in the lead-up to the 2014 referendum has allowed a loophole to be exploited to allow separatists to voice endless demands for a re-run and kept Scotland shackled to the hamster wheel of ‘neverendum’.

“And we believe the rules must be properly debated in Parliament rather than hastily thrown together in an ad hoc fashion in deals with the separatists as happened prior to 2014.”

Such a move would no doubt provoke howls of faux constitutional outrage from Holyrood, Mr Beckett noted, but the fact remains that the UK Parliament with its 59 Scottish MPs remains sovereign and is the only place where this legislation can legitimately be executed.