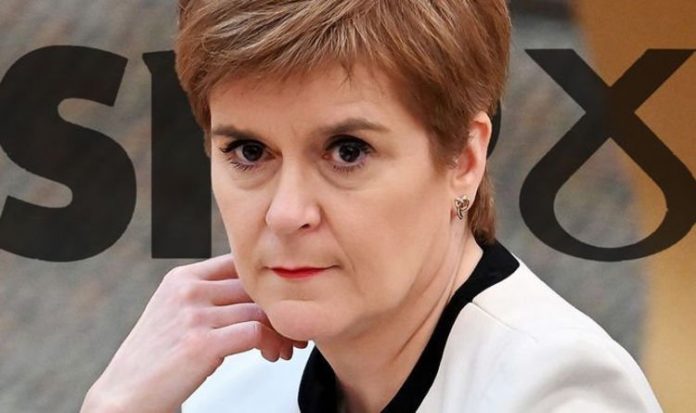 The Scottish First Minister has seen support for independence surge in the last 12 months, and polling suggests the SNP are poised to win a comfortable majority in May’s Holyrood elections. But this political momentum has coincided with factional disputes in the SNP, laid bare by the sacking of Joanna Cherry this month. Ms Cherry has been at the centre of the party division, having served in Ms Sturgeon’s front bench but also regarded as a prominent backer of former leader Alex Salmond. As the inquiry into the handling of complaints made against Mr Salmond in 2018 continues, concerns have arisen that the dispute could derail the SNP’s independence plans.

In March last year, Ms Sturgeon abandoned her hopes of a second referendum as the coronavirus pandemic began to grip the UK.

Her Constitutional Relations Secretary, Michael Russell, said the SNP administration had “paused work” on preparing for IndyRef2 in late 2020.

Daily Record Political Editor Paul Hutcheon warned that “dangerous times are ahead” for Ms Sturgeon as frustration had already built over the lack of progress in the independence movement.

After the 2019 general election, Ms Sturgeon pleaded for more patience from Scottish nationalists, saying “to pretend that there are shortcuts or clever wheezes that can magically overcome the obstacles we face would be to do the independence cause a disservice”.

The blog’s article said: “Five years and two months have passed since Sturgeon assumed the office of First Minister on November 20, 2014.

“Since that day, the people of Scotland have gone to the ballot box on six occasions, and on every one the SNP have won a clear victory – in four of those six elections, by a margin of more than 20 percentage points over their nearest opponent.

“And yet the party whose primary/sole reason for existence is achieving independence for Scotland has taken those six resounding mandates in half a decade and delivered absolutely nothing with them.

The public law expert said: “Would there be a unionist boycott? I think this is quite likely.