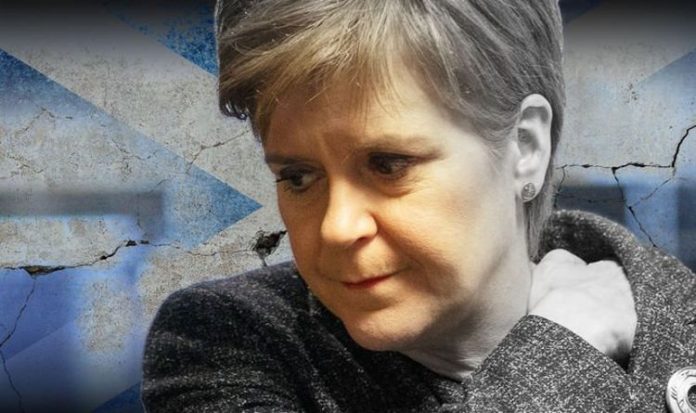 SNP polling is looking promising ahead of Scottish elections in May, as highlighted by a Datawrapper model, reported on by the New Statesman. It showed polling from January 13 putting the SNP on course for 53 percent of the vote while the Scottish Tories and Scottish Labour languished on around 19 and 18 percent respectively. A dominant win could strengthen First Minister Nicola Sturgeon’s argument in favour of a second referendum on Scottish independence. Many supporters of secession have grown frustrated with the First Minister’s lack of progress thus far, including prominent pro-independence blog ‘Wings Over Scotland’.

The site published a damning verdict on Ms Sturgeon ahead of Brexit Day in January 2020, branding the Scottish leader “the betrayer”.

It also argued that the SNP didn’t have the finances to fight an independence campaign.

It said: “The cold hard fact is that the SNP is in absolutely no financial position to fight a second independence campaign this year, or next year, or any year soon.

The blog highlighted that the SNP had £411,000 cash in hand at the end of 2018, and that senior SNP sources had told the website that enquiries about where ring-fenced funding had gone had been “met with a brick wall”.

After the party’s finances were published, there were two more election campaigns – the 2019 European and general elections.

On top of this, Scottish elections will take place in May – the SNP usually spends around £1.5million on campaigns for Holyrood votes.

He added: “We know what their priority is, the one thing that trumps all others, it’s independence and independence at all costs.

“They’re sitting on this cash, as they see it as a war chest in the run-up to the election and the furtherance of their independence goals.”

This claim was described as “ridiculous” by SNP Finance Secretary Kate Forbes.

She said that Mr Golden “knows precisely where the money is going” and that £2.3billion to support business and recovery had already been offered.

Ms Forbes continued: “The reference to £2.2billion in the Labour motion is frankly ridiculous as anybody with a calculator would know and I can assure you that all funding available to us is being and will continue to be used to support business.”