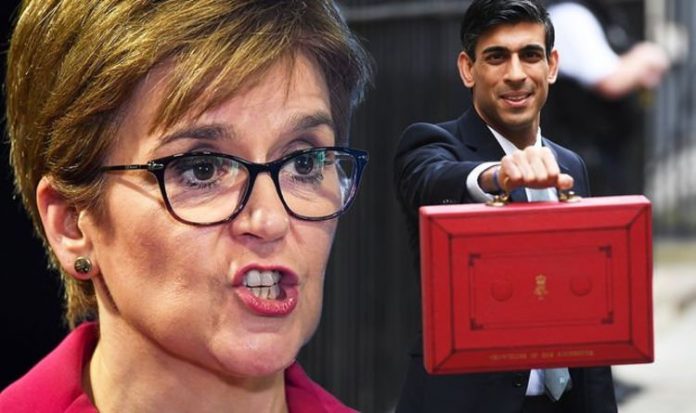 The Scottish economy has been hit hard by the coronavirus pandemic as the whole of the UK remains in lockdown. In the final quarter of 2020, the Scottish economy still managed a slight growth of 1.6 percent – down from the 15.8 percent boost in the third quarter. Scottish GDP in February 2021 was 7.2 percent lower than that of February the previous year. As the economic crisis took its toll last year, Scottish First Minister Nicola Sturgeon clashed with Chancellor Rishi Sunak over funding for Scotland.

In October, the SNP chief branded Mr Sunak’s approach to Scotland “intolerable” and unacceptable” after he announced new grants for businesses and an extension of the job support scheme, but didn’t hand Scotland any cash upfront.

She added that the Chancellor’s plans were “deeply unfair to Scottish businesses who deserve the same open-ended commitment given to counterparts in England”.

Ms Sturgeon said: “The Chancellor has told the Scottish Government that today’s announcements won’t deliver any upfront extra cash for Scotland beyond the (welcome) £700m announced recently – and he won’t confirm the range of extra spending (beyond business support) that it’s expected to pay for or for how long.

“Businesses in England have been given, rightly, an open-ended commitment to support for as long as needed.

“And the Scottish Government will be expected to match that for Scottish businesses, with no confirmation that the money will be there to pay for it (& no borrowing powers to raise it).

“It is an intolerable and unacceptable position – and deeply unfair to Scottish businesses who deserve the same open-ended commitment given to counterparts in England.”

She said: “The Chancellor’s written a blank cheque for business support grants in England, but refuses to do the same for Scotland.

“We are being kept in the dark on future funding and denied the ability to borrow if we need to – and it is utterly wrong for Scottish business to not have the same level of certainty on financial support that is available to businesses in England.

“That is why it is important that the Scottish Government can respond at pace to business need and I am concerned that the Chancellor made clear today that the recent support to businesses in England will not generate further consequential funding for Scotland.

“The £700m announced two weeks ago, which is meant to cover all our additional funding pressures for the final six months of the year, is clearly insufficient to mitigate the impact on our economy and public services.”

He said: “With this latest increase in financial support, he has gone the extra mile to protect Scottish jobs and businesses.

“This new, blockbuster support is a major upgrade that shows the UK Government will take decisive action to protect Scottish jobs wherever necessary.”

Ahead of the Budget, Scotland is expected to receive funding for green industries.

Mr Sunak has committed £27 million for the Aberdeen Energy Transition Zone, a first step in delivering on the Government’s promise for a sector deal for the oil and gas industry, in a bid to “transform” northeast Scotland into a globally competitive hub for cleaner energies such as offshore wind and hydrogen.