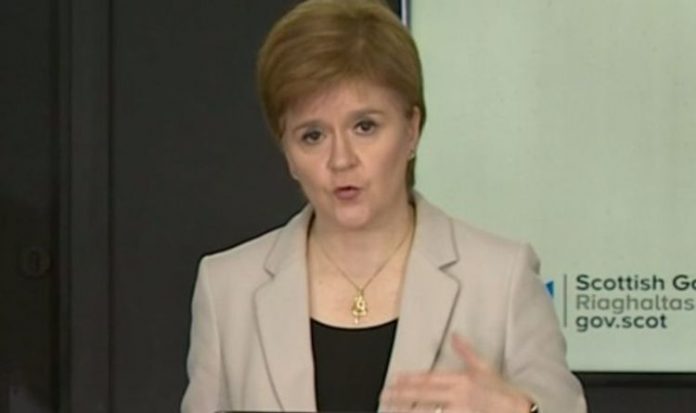 Addressing the nation at her daily coronavirus press briefing in Edinburgh, Nicola Sturgeon said 79 cases were so far confirmed in Aberdeen as she announced new lockdown measures will be reviewed in seven days time. Addressing the cluster in Aberdeen, the First Minister said that there were a suspected 39 cases in the NHS Grampian area. She added: “Let me provide the latest data on the situation in Aberdeen and you will appreciate this is an active outbreak so the information will be changing regularly at the moment.

“But I can confirm that as of now or a few moments ago, a total of 79 cases has been confirmed as associated with that cluster.

“That is an increase of 25 since yesterday.

“There’s a further 30 cases that are possibly associated with that link and a total of 233 close contact have already been identified.

Sturgeon also said that 17 new cases in Greater Glasgow and Clyde are being examined to see if there are any visible patterns.

However, she said that, as the number of cases drop, the reproduction number becomes less reliable.

Some 275 people, as of last week, are infectious in Scotland, she said.

The First Minister added: “If you have been to any of these premises, even if Test and Protect hasn’t been in touch with you, we’re still asking you to be extra vigilant for symptoms.”

She also urged people contacted by the Test and Protect teams, in Aberdeen or anywhere else in Scotland, to comply with advice they are given.

The First Minister concluded by thanking the people of Aberdeen for their co-operation, adding: “I know that this is a real blow to the city and all of us regret that we’ve had to take this position, but I do believe that people understand why it is necessary.

“There are just too many uncertainties about this outbreak right now so we are not yet confident that we can keep it under control without these additional measures.”

Contact tracing is continuing in the city of Aberdeen amid a coronavirus outbreak which caused lockdown measures to be reintroduced.

The Scottish Government’s Health Secretary said schools reopening in the city as scheduled on Tuesday is a priority but warned additional measures may be required if necessary.

Jeane Freeman told the BBC’s Good Morning Scotland radio programme it was important to recognise the complexity of the cluster – in comparison with similar outbreaks in Inverclyde and Lanarkshire – with the number of venues involved.

“That is part of the complexity of this, the nature of it if you think about some of the other outbreaks that we have responded to, and traced right through to the end of the transmission chain.

“It is complicated to know exactly where everyone has been and that’s part of test and protect, which of course we need to remember is still under way, we’ve not concluded this yet.”