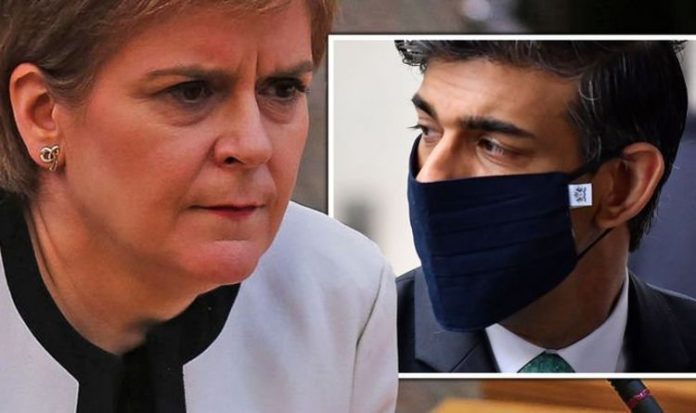 Nicola Sturgeon may have to resign warns Ruth Davidson

Chancellor Rishi Sunak is set to announce his Budget on Wednesday as the UK economy continues to struggle during the pandemic. He launched significant support measures such as the job retention scheme last year, which was used by 4.7 million people in January. But Mr Sunak has also come under scrutiny as gaps appear in Government support, such as the many self-employed people unable to access the Self-Employed Income Support Scheme. The UK Government also endured a row with the Scottish Government last year, as Ms Sturgeon and her SNP colleagues hit out at Mr Sunak.

Ms Sturgeon called for an £80billion stimulus package to help revive the economy north of the border.

The Scottish Government published a paper in June 2020 setting out 10 requests for UK ministers in dealing with the recession, including a call to “avoid a return to the austerity of the past”.

Ms Sturgeon said the proposals were “ambitious but also practical and sustainable”, and would “benefit not just Scotland but the whole of the UK”.

However, in July 2020, the Scottish Government reacted with disappointment when Mr Sunak announced £30billion of stimulus funding.

Nicola Sturgeon news: Sturgeon has hit out at Sunak during the pandemic (Image: getty)

Scottish finance secretary Kate Forbes said the figures for Scotland were “disappointing, underwhelming and fall short of the scale required to reboot the economy”.

She added: “We called for an £80bn stimulus package to build a strong, green and inclusive economic recovery and while there are elements in this announcement to be welcomed, in particular the measures on VAT for tourism and hospitality, overall this package is a huge opportunity missed. It falls well short of delivering what is needed to boost the economy and protect jobs.

“There is no new capital spend, no extension to the furlough scheme for hard-hit sectors and no further support for households in financial difficulty. A half price meal out does not help those struggling to put food on the table.

“Many of the initiatives are short-lived and do not provide long-term certainty. Instead they will simply push the problems back to the end of the year when we will also have to deal with the end of the transition period with the EU.

“Despite announcing new funding measures worth up to £30bn today, most of it bypasses devolution.”

Mr Sunak responded by saying his plan would create jobs for Scotland.

The Chancellor added: “Since this crisis started, our support for Scotland has protected more than 620,000 jobs, thousands of businesses and paid £425m to self-employed people.

“I’ve set out our plan to protect, create and support jobs across Scotland – to level up opportunity, safely reopen our economy and strengthen the Union.

We’re investing £800m through the Barnett formula, giving Scotland the funds to create green news jobs. And we’re protecting the thousands of existing jobs in the hospitality sector with a cut to VAT and the Eat Out to Help Out scheme.”

The tier-based restrictions imposed in November preceded a 1.5 percent drop that month.

This also came before the Scottish Government placed the whole of Scotland into a stricter lockdown from Boxing Day.

In the final quarter of 2020, the Scottish economy still managed a slight growth of 1.6 percent – down from the 15.8 percent boost in the third quarter.

Scottish GDP in February 2021 was 7.2 percent lower than that of February the previous year.

In October, Ms Sturgeon branded Mr Sunak’s approach to Scotland “intolerable” and unacceptable” after he announced new grants for businesses and an extension of the job support scheme, but didn’t hand Scotland any cash upfront.

She added that the Chancellor’s plans were “deeply unfair to Scottish businesses who deserve the same open ended commitment given to counterparts in England”.

Scotland’s economy has suffered along with the rest of the UK as the health crisis keeps the UK in lockdown.