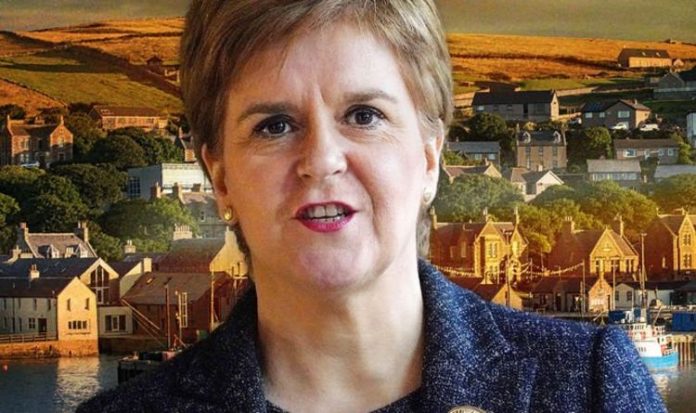 The Shetland Islands have already voted to explore a break from Scotland in order to achieve financial and political self-determination. Councillors voted 18 to two in favour of the motion, a blow to First Minister Nicola Sturgeon. Funding cuts and centralised decision-making by the SNP were argued as reasons to explore independence. Steven Coutts, the council leader, said “the status quo is not working” as “devolution and the Islands Act have not made any tangible difference to the quality of life”. He added that the Scottish Parliament also feels “remote” to Shetland, which has a population of 23,000.

The concerns echo grievances in the Orkney Islands, who have also been spoken about as another potential thorn in Ms Sturgeon’s side.

In 2017, the Orkney Islands pushed for more control over its own affairs.

The councillors were clear that while independence from Scotland was not the objective, more of a say over its political and economic affairs was a key reason for the move.

Council officials prepared a 19-page report considering “whether the people of Orkney could exercise self-determination if faced with further national or international constitutional changes” and whether “more autonomy might be beneficial for the wellbeing of Orkney”.

It came as the Islands were set to leave the EU along with the rest of the UK, despite Orcadians voting in favour of remaining in the bloc.

Councillor Graham Sinclair led the requests, adding that he was “not in favour at all of separatist independence” but instead wanted to explore “greater autonomy and self-determination for Orkney”.

He said: “The report reinforces what has been a very long-held belief for me – Orkney is so distinctively different, both historically and culturally, that Orcadians deserve and are entitled to have a strong and clear voice of their own.

He said: “We want to seek our opportunity as a unique part of the UK that we could do something different if we wished.

“All constitutional matters ultimately rest with Westminster, so the question is, we would need to make sure that is written into any future referendum.”