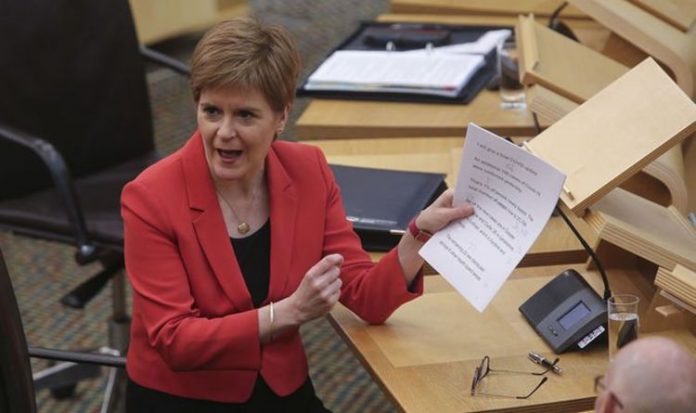 Ms Sturgeon’s comments come after it was announced police were investigating a house party in Midlothian. More than 300 people attended the event, which was held in an AirBnB in Gorebridge. The First Minister recently came under fire for reinstating lockdown restrictions in Glasgow Central and Clyde yesterday, after a rise in coronavirus cases.

Ms Sturgeon responded to an article about the police investigation.

On Twitter the First Minister blasted the partygoers for being “irresponsible” during the pandemic.

She said: “It’s hard to put into words how utterly irresponsible this kind of behaviour is in current circumstances.

“It puts people at risk and threatens our progress out of lockdown.

But Scottish people on Twitter have taken the First Minister to task for her comments.

One user pointed out “double standards” from Ms Sturgeon over current rules on coronavirus restrictions.

Another said: “Maybe if pubs could play music Nicky, we’d not need 300+ at a house party.

Police were called to the Midlothian house party at 0:20am on Sunday.

The party was dispersed by the officers, and a 29-year-old man was issued a fixed penalty for organising the event.

Deputy Chief Constable Malcolm Graham said at the time: “Those attending this organised event showed a blatant disregard for the regulations in place to help save lives and prevent the spread of coronavirus.

“Anyone attempting to hold such an event, or any party in clear breach of the law, should be aware they will be met with a robust response from Police Scotland.”

It comes after the First Minister introduced local lockdown in Glasgow and surrounding areas.

Ms Sturgeon defended the decision, saying she understood that people in the area are “frustrated”, but urged them to see the move as a “wake-up call”.

But political columnist Alison Rowat warned patience for the restrictions was running out in Scotland, and accused the SNP of being addicted to causing panic over the coronavirus crisis.

She said: “In effect, more than 800,000 people have been hit by a sledgehammer of a policy because of a few selfish nuts.”