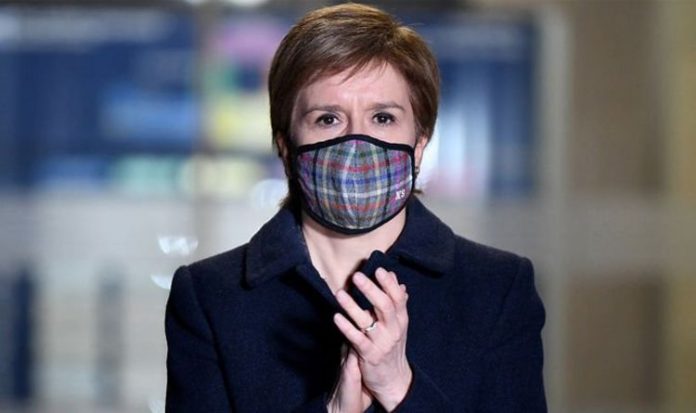 Nicola Sturgeon asked if she will ‘resign’ if breach found

The work is due to be released in hardback on May 10, just four days after the Scottish parliament elections. However, according to The Times, publisher Sandstone Press received over £410,000 from Creative Scotland, a Scottish government-funded body, since 2006.

The SNP has held power in Holyrood, either alone or in coalition, since the 2007 Scottish Parliament election.

Maurice Golden, shadow culture secretary for the Scottish Conservatives, warned against “the SNP’s creeping attempt to influence and control all aspects of Scottish public life, including arts and culture”.

The book, due to be released as a hardback, is being edited by Robert Davidson, who founded Sandstone Press.

The Times reports he has previously publicly expressed his support for the SNP and Ms Sturgeon on social media.

A collection of Nicola Sturgeon’s speeches is due to be published on May 10 (Image: GETTY)

Ms Sturgeon is demanding a second referendum on breaking up the UK (Image: GETTY)

Titled ‘Women Hold Up Half the Sky’, a quote from Chinese communist dictator Mao Zedong, it includes speeches from Ms Sturgeon “given between November 2014, when she took office, and February 2020, after Scotland’s exit from the European Union”.

He was responsible for tens of millions of deaths via execution, famine and forced labour making him one of the most deadly dictators in human history.

Speaking to The Times, Ms Golden raised concerns about Ms Sturgeon’s arrangement commenting: “We know there have been growing concerns about the SNP’s creeping attempt to influence and control all spheres of Scottish public life, including arts and culture.

“It is a favoured tactic of nationalists the world over and I applaud those in Scotland who identify it and call it out.

“I hope that is not what we are seeing here.

“However, it’s notable that the only publishers who see commercial value in Sturgeon speeches have been in receipt of significant sums of public money through an SNP government quango.”

The SNP is demanding a second referendum on Scotland leaving the UK and hopes to get a mandate at May’s Scottish parliament elections.

However, Boris Johnson insists he will not authorise another referendum, considering the matter “settled” as Scotland decisively to remain part of Britain in 2014.

He points out ahead of this vote senior SNP figures pledged it would be a “once in a generation” poll and has suggested there shouldn’t be another referendum until 2054.

According to the officially released synopsis Ms Sturgeon’s book “focuses on the importance of good government and Scotland’s place in the world”.

It adds: “Taken together they show a side of Nicola Sturgeon that is too often missed in public discourse.

Support for Scotland leaving the UK has increased since Brexit (Image: EXPRESS )

“Thoughtful, progressive, compassionate, as well as passionately committed to the cause of Scottish independence, she is as pragmatic on matters of economic strategy as she is progressive on social issues.”

Senior SNP figures have threatened to hold a ‘wildcat’ referendum even without the consent of the British Government, similar to what took place in Catalonia in 2017.

The 2017 Catalan referendum produced a majority for independence, but was boycotted by many unionist voters.

Scotland voted to remain part of Britain in 2014 (Image: GETTY)

Spain’s government refused to accept the result and a number of the key organisers were arrested and prosecuted for their role in the affair.

The SNP is currently riven by internal conflict over an inquiry into the handling of abuse allegations against its former leader Alex Salmond.