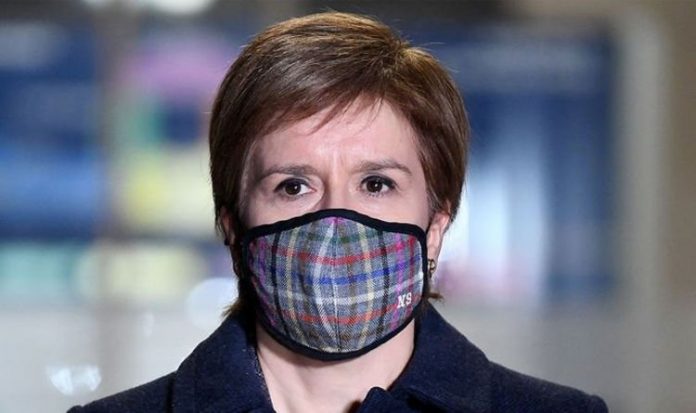 Scottish Parliament elections are due to be held on May 6 and are planned to go ahead despite the coronavirus pandemic. Nationalists argue an SNP victory would provide the mandate for a second referendum on Scotland leaving the UK.

However, Boris Johnson has said he will refuse to allow another poll as the question was “settled” by the 2014 referendum.

And now an SNP rival has warned the election will be “skewed towards the governing party” due to Covid campaigning restrictions.

Alex Cole-Hamilton, a Liberal Democrat MSP, highlighted the worrying fact it is easier to deliver takeaway menus in Scotland than campaign leaflets.

He wrote in the Edinburgh Evening News: “I’ve no problem with an election in the spring. I relish the idea of putting forward a positive alternative to the SNP.

“If votes can be both cast and counted safely then we should have it, but we have to allow socially distanced election campaigning to accompany that.

“I’m concerned that we cannot ask the public to render a judgement on who they wish to serve them in Parliament, if the only voice they hear in that campaign is that of the First Minister from her lunchtime briefings.”

Due to coronavirus regulations, Mr Cole-Hamilton alleges it is currently “illegal” to post political leaflets through people’s doors.

Mr Cole-Hamilton said: “It’s a curious thing, but right now in Scotland, you can deliver mail if you’re a postie or takeaway menus if you’re a restaurant owner, but if you want to deliver leaflets which might criticise the SNP government or set out an alternative point of view, that’s illegal.

“If the government believe it’s safe enough to invite people to go to the polls, then it must be safe enough to allow the important activities of public debate and campaigning that precede that vote to take place as well.”

Last month Ms Sturgeon argued it is “really important” the democratic process is able to continue during the pandemic.

The United States held a presidential election in November despite the Covid crisis.

Speaking to the BBC she said: “I think everybody would agree it’s really important that our democratic processes continue and that elections happen.

“There have been elections in many other countries over the course of the pandemic.”

Mr Cole-Hamilton said he’s prepared for the vote to go ahead, but campaigning restrictions need to be lifted.

The Liberal Democrat commented: “I’m happy to fight the election, but the SNP must not be allowed to use the pandemic to suppress the activities of their opponents.”

However, older students are unlikely to head back until at least March 15.

The SNP leader said it is “highly unlikely” hotels will be allowed to open for the Easter holidays and cautioned against booking overseas holidays for the summer break.