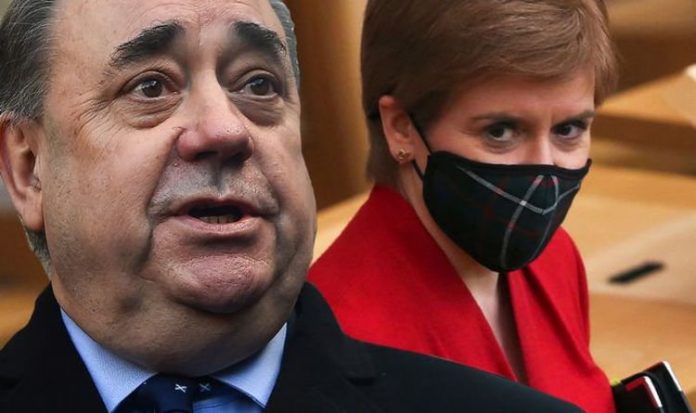 Alex Salmond has alleged there was a “malicious and concerted attempt” to remove him from public life involving senior SNP figures. Last year a jury found the former first minister not guilty of 12 sexual assault charges, while a thirteenth was found not proven.

Mr Salmond has also agreed to appear before a Holyrood inquiry into the Scottish Government’s handling of complaints against him on Friday.

He had been due to speak on Wednesday but stepped back after Scotland’s Crown Office controversially redacted part of his written evidence.

The extraordinary standoff is threatening to tear the SNP apart as the party attempts to break up the United Kingdom.

Ms Sturgeon was asked whether she lied about the Salmond affair during her daily coronavirus briefing.

“There was no conspiracy theory” (Image: GETTY)

Alex Salmond said he was targeted by a “malicious and concerted attempt” (Image: GETTY)

She replied: “Any suggestion, any at all, that these are in any way politically influenced are downright wrong.

“I would suggest they go further than that, that they actually start to buy into what is a false and quite dangerous conspiracy theory that has no basis in fact.”

She added: “There was no conspiracy theory and I sometimes think that the preference perhaps of Mr Salmond is to continue to make those claims without ever subjecting them to the proper scrutiny of the parliamentary committee looking into them.”

Unionist politicians have angrily criticised Ms Sturgeon’s handling of the affair with Scottish Conservative leader Douglas Ross accusing the SNP of “a cover-up” and “shutting down scrutiny”.

Ms Sturgeon hit out at a “false and dangerous conspiracy theory” (Image: GETTY)

Mr Salmond has demanded the Lord Advocate, chief legal adviser to the Scottish government, appear before parliament to explain why 474 words of Mr Salmond’s testimony were removed.

If found to have lied about her knowledge of the allegations against Mr Salmond Ms Sturgeon could be forced to resign.

In his redacted submission Mr Salmond said: “I leave to others the question of what is, or is not, a conspiracy but am very clear in my position that the evidence supports a deliberate, prolonged, malicious and concerted effort amongst a range of individuals within the Scottish government and the SNP to damage my reputation, even to the extent of having me imprisoned.

“That includes, for the avoidance of doubt, Peter Murrell (chief executive), Ian McCann (compliance officer) and Sue Ruddick (chief operating officer) of the SNP together with Liz Lloyd, the First Minister’s Chief of Staff.

“The stench of a cover-up is overwhelming” (Image: GETTY)

“There are others who, for legal reasons, I am not allowed to name.”

Mr Murrell, who is also Ms Sturgeon’s husband, Mr McCann, Ms Ruddick and Ms Lloyd have all denied any wrongdoing.

Mr Salmond added there had been a “complete breakdown of the necessary barriers which should exist between government, political party and indeed the prosecution authorities in any country which abides by the rule of law”.

After part of Mr Salmond’s testimony was Tory leader Douglas Ross said: “The stench of a cover-up is overwhelming.

Boris Johnson has ruled out a second referendum on Scotland leaving the UK (Image: EXPRESS )

“The SNP Government and the Crown Office are shutting down scrutiny.”

This view was supported by Conservative MSP Murdo Fraser who branded the SNP a “cesspit of vipers not fit for government”.

The internal row is distracting from the SNP’s bid for a second referendum on Scotland leaving the UK.

Boris Johnson has ruled out another public poll considering the matter settled in 2014 when Scotland voted to remain part of Britain.

As senior SNP figures said the 2014 poll would be “once in a generation” he has argued there shouldn’t be another referendum until 2054.

Mr Ross has urged unionists to boycott any “wildcat” referendum called without the British Government’s consent.