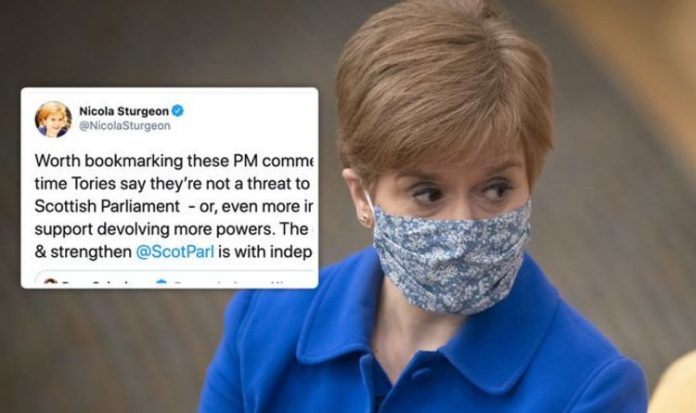 The First Minister responded to reports that the Prime Minister had rubbished giving any more powers to Scotland. In response to Ms Sturgeon, Mr Ross, Scottish Conservative leader, lashed out for her prioritising independence amid the coronavirus pandemic. Ms Sturgeon has resurfaced calls for an independence referendum, as the motion is growing in support amongst Scottish voters.

Ms Sturgeon responded to reports from which claimed the Prime Minister had rubbished devolution.

Taking to Twitter, Ms Sturgeon said: “Worth bookmarking these PM comments for the next time Tories say they’re not a threat to the powers of the Scottish Parliament – or, even more incredibly, that they support devolving more powers.

It comes after the First Minister is campaigning for Scottish elections next year, which could see her consolidate her grip on Holyrood.

But Mr Ross has snapped back at the First Minister and the Prime Minister for their comments.

The Scottish Tory leader disputed Mr Johnson’s comments about devolution, and targeted the SNP leader for campaigning for independence amidst a national crisis.

He said: “Devolution has not been a disaster.

“The SNP’s non-stop obsession with another referendum – above jobs, schools and everything else – has been a disaster.”

Downing Street, when asked about the comments, did not deny Mr Johnson made the remarks.

They said: “The PM has always supported devolution, but Tony Blair failed to foresee the rise of separatists in Scotland.

“Devolution is great – but not when it’s used by separatists and nationalists to break up the UK.”

It comes as Ms Sturgeon has been blasted by Mr Ross for wasting public funding on tribunals over police officers.

Mr Ross said it was time the SNP leader stepped in to bring about a fairer system which would use taxpayers’ cash in a better way.

He tweeted: “People would rather see scarce budgets spent on frontline officers than on expensive lawyers.

“SNP must fix the broken system it created.”