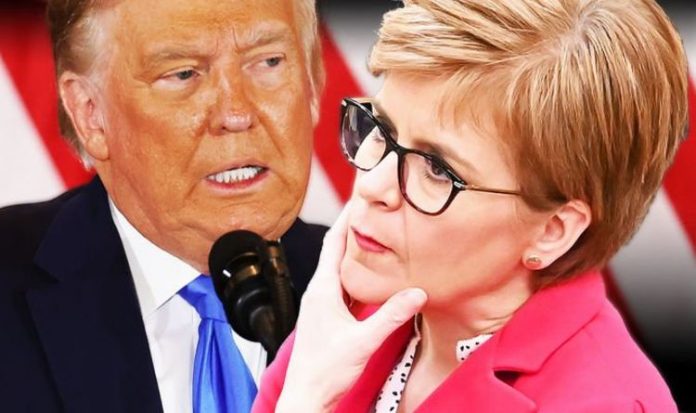 Former aide Anthony Scaramucci claimed Mr Trump would “go down easier” if he ever lost a US presidential election contest. Mr Scaramucci, Trump’s former communications director hinted the Republican could fly to Scotland to play golf if Joe Biden emerged victorious replicating a 2016 move which he branded a PR stunt.

He added: “He’ll go down easier than most people think.

“Nothing crushes this guy.”

The ex-aide stressed he had ordered his private plane to be readied for take-off during the 2016 vote “so that the next morning he could fly to Scotland to play golf at his Turnberry resort.”

Mr Trump, whose mother was born in Scotland, has also hinted about going overseas during a rally in Georgia, adding: “You know what? Running against the worst candidate in the history of American politics puts pressure on me.

“All votes should be counted and I think that is an important principle and the outcome of the election should be respected.

“I won’t be the only one who listened to the President’s speech earlier this morning with a sense of discomfort and foreboding.

“I hope sensible voices in America come to the fore in terms of the protection of the integrity of democracy – whatever the direction the final few state tallies take us in.”

It is expected the contest between Donald Trump and Joe Biden may remain on a knife-edge for days, with both men still in with a chance of winning enough Electoral College votes from the undeclared states to secure the presidency.

Seven states are yet to announce any Electoral College results, with some days away from doing so.

A large part of the delay can be attributed to the COVID-19 pandemic, which has killed more than 230,000 people in the US.