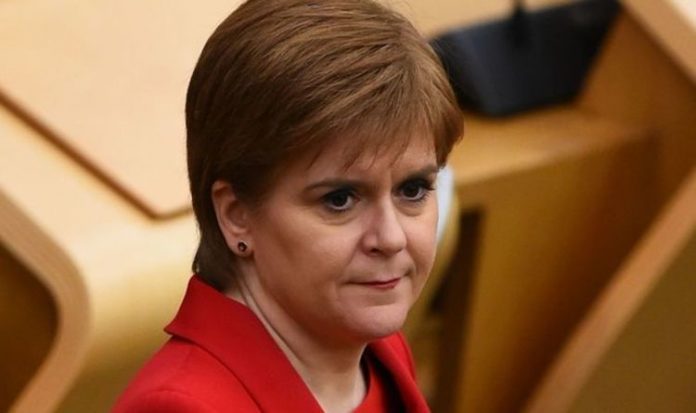 First Minister Sturgeon is readying herself and the SNP to win the votes of millions of Scots in this May’s election. The ballot could prove decisive in the SNP’s future, as if the party wins a landslide – as is predicted – Ms Sturgeon has said she will hold a “legal referendum” on Scottish independence. She has now set out an 11-point roadmap for a second independence vote, just six years after the “once in a generation” referendum in 2014.

The SNP has dominated Scottish politics for more than a decade, first gaining power in 2007 after forming a minority government.

It went on to win the 2011 Holyrood election, after which it formed the Scottish Parliament’s first majority government.

Having won another landslide UK-wide election victory in 2015 – winning 56 out of 59 seats in Scotland – the SNP appeared near-unstoppable.

It faltered in 2016, however, being reduced to a minority government in Holyrood as the Conservatives achieved their best electoral performance north of the border since 1992.

Nicola Sturgeon: The First Minister’s demise was mapped out by a political analyst (Image: GETTY)

Scotland: Sturgeon has said she will call a ‘legal referendum’ if the SNP wins in May (Image: GETTY)

Yet, the national party prevails, mainly because Ms Sturgeon has no decent opposition in Holyrood.

Steven Fielding, Professor of Political History at the University of Nottingham, told Express.co.uk the SNP effectively have free-reign over Scotland after Labour – which traditionally did well in the country – declined in popularity, especially under former leader Jeremy Corbyn.

Prof Fielding said: “Sturgeon’s benefited from a Conservative Government in Westminster, and that has always benefitted the Scottish nationalists because they can say ‘Who’s looking after Scotland’s interests in Westminster? Labour can’t, because they’re not in power.’

Boris Johnson: The PM has repeatedly refused to acknowledge calls for an Indyref2 (Image: GETTY)

“Sturgeon and the SNP have been very lucky in their opponents.

“While for many Scots she’s become the embodiment of a nation, she’s by no means the brilliant leader many of her supporters think.

“There’s a lot of questions about her that could be asked but they’re not because she doesn’t have much of an opposition.”

More accountability, he suggested, could be the route to Ms Sturgeon’s downfall.

Although Prime Minister Boris Johnson initially appeared unbothered by another independence vote, repeatedly refusing to entertain the idea of an “Indyref2” – he said Scotland should aim for asking for one around the year 2055 – reports now suggest he is drawing up a five-step plan to stop Scotland breaking up the Union.

According to day Times, Westminster will now appointment Oliver Lewis, who was deputy to chief Brexit negotiator David Frost, as the leader of the charge.

It said: “Expect ministers to hail the London Government – with two of the top four jobs in the hands of non-white ministers – as more multicultural than France or Germany.

“The Union will be sold as forward-thinking on green issues and technology.”

The Labour Party has also devised its own plans to tackle the independence conundrum, its leader Sir Keir Starmer having announced his “constitutional commission” late last year that would spread devolution to all corners of the UK.

Yet this promise of devolution might be too little too late with the Tories still in power, Paul Embery, a leading trade unionist and Labour member, told Express.co.uk.

He said that one of Ms Sturgeon’s trump cards is to, “blame the nasty Tories in Westminster for everything that goes wrong in Scotland”.

The UK’s next general election isn’t until 2024, a time by which many believe could be too late to reverse independence sentiment.

The Union: The tide of opinion north of the border currently veers towards independence (Image: GETTY)

Yet, Ms Sturgeon might find it difficult to continue on the same path, as Scottish opposition parties this week slammed her “slow” rolling out of the coronavirus vaccine.

The latest data showed Scotland’s per capita rate of vaccinations of over-18s stood at 9.4 percent on Monday, lower than the UK’s average rate for over-18s of 12.4 percent.

However, Ms Sturgeon defended her record and drew attention to the fact that Scotland had vaccinated nearly all care home residents, unlike England.

And while the upcoming Holyrood, Welsh, local and mayoral elections will likely be based on how each region has handled the pandemic, polls suggest that Scots are not put-off by Ms Sturgeon’s handling of the crisis.

According to one commissioned by The Times, 52 percent of Scots support Indyref2.

It means that if an independence vote was called tomorrow, Scotland would leave the UK.