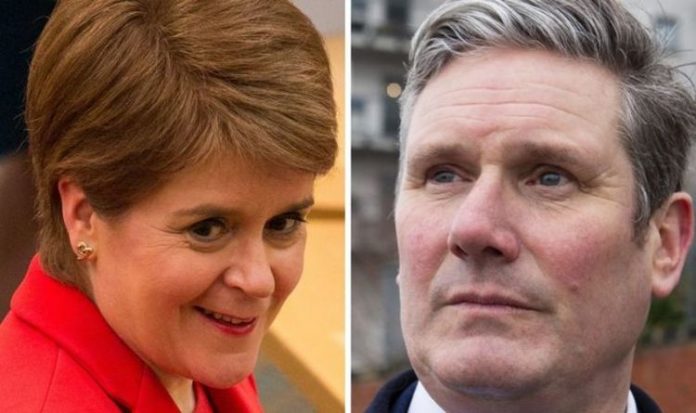 The Scottish National Party (SNP) was thrown into turmoil yesterday after First Minister Sturgeon sacked one of her most high-profile MPs. Described by some as a “ruthless purge”, Ms Sturgeon removed top QC Joanna Cherry from her role as spokesperson on home affairs and justice. Ms Cherry has been one of the SNP’s most notable performers in Westminster, regularly appearing in the House of Commons.

The abrupt dismissal was seen by many SNP MPs as a punishment for her strong allegiance to former First Minister Alex Salmond, who is currently embroiled in a battle with Ms Sturgeon.

The tension and potential infighting that could follow might crack the SNP’s hitherto unbreakable armour, and let in outside influence from either Prime Minister Boris Johnson or, more likely, the Labour Party.

Sir Keir has struggled to make anything of Labour in Scotland since the SNP took almost all the red seats following a shoddy attempt by former leader Jeremy Corbyn to garner support north of the border in both 2015 and 2017.

In the former, Ms Sturgeon won a resounding 56 of 59 seats, although in 2017 lost more than a third of what it previously picked up, most surprisingly to the Tories who secured their best performance in the country since 1983.

Scotland: Sturgeon has said she will hold a ‘legal referendum’ should the SNP win a landslide in May (Image: GETTY)

Sir Keir is now looking to Scotland to bolster support, win back those SNP voters, all while Ms Sturgeon steams ahead with her plans of holding an independence referendum perhaps as soon as in the next three months, should her party win a majority in Holyrood’s May elections.

There is little hope for Sir Keir, however, as the Labour leader’s battle has become one of a “Catch-22”, Paul Embery, a leading trade unionist and Labour Party member, told Express.co.uk.

He said Ms Sturgeon and the SNP had pushed Labour – who for years enjoyed natural support in Scotland – into a corner that will be hard to get out of.

Mr Embery explained: “Labour has a massive problem in Scotland, Starmer knows it’s crucial for the party to get Scotland back.

“The SNP are always stronger when there’s a Tory Government in Westminster because there is generally an anti-Tory feeling in Scotland – it’s very easy for Sturgeon to blame the nasty Tories in Westminster.

“But this is where Starmer’s Catch-22 comes in: Labour needs to get back in Westminster, but in order to do that, it needs to make inroads into Scotland.

“But in order to do that, it needs to cut through the SNP vote – it’s not going to do that by coming out for independence.

“Labour’s not going to argue against the Union; but to cut through to some of the SNP voters, the party needs to offer something as close to independence as possible.

“If Labour won power back in an election, it would immediately reduce independence sentiment because the nasty Tories wouldn’t be around anymore.

“Yet, in order to win power, Labour first needs to make gains in Scotland.

“The SNP dominate Scotland, and so Labour has to offer something like independence without ever offering independence – it’s nearly impossible.”

Sir Keir recently announced his plans to draw up a “constitutional commission” in which Labour would spread devolution to all corners of the UK.

Boris Johnson: The PM has repeatedly refused to entertain the idea of a second independence vote (Image: GETTY)

Devolution: Starmer will investigate how devolution can be spread to the whole of the UK (Image: GETTY)

Ms Sturgeon, on hearing the news, branded him a “constitutional tinkerer”, and said Labour had no chance of challenging the SNP.

Sir Keir’s devolution plans resemble those of his predecessor, Tony Blair, who in the early Noughties sought to silence once and for all murmurs of independence across the Union.

It seemed to work for a while, until now, as independent movements have also started to gather momentum in Wales.

And while Labour’s plans are to stop independence, many say it might be too late.

Steven Fielding, Professor of Political History at the University of Nottingham, told Express.co.uk: “If things remain the same, it’s very likely Scotland will push for a referendum in the future and they’ll win it.

Sturgeon news: The politician took over Alex Salmond in 2014 after the failed independence vote (Image: GETTY)

“Starmer’s argument is that if we don’t say we’re going to devolve power, as a kind of way to keep the Scots in the union, they’re going to leave – he’s the only leading politician that wants a union and wants to do something about it.

Independence has grown in popularity in Scotland since the 2014 independence vote when 55 percent of Scots voted to stay.

Now, however, it is largely accepted that if a referendum was held tomorrow, Scotland would vote out.

Robert Tombs: The historian said it is unlikely that Scotland will break away from the Union (Image: Penguin)

Yet, Robert Tombs, the renowned British historian, told Express.co.uk that the data may be far from the truth.

He reflected on the Brexit vote, and cited evidence for as much as two thirds of people not liking the EU, but the vote only having amounted to 52 percent of the electorate voting to leave.

Prof Tombs said: “It seems to me if you think that Scotland is similar, you’d have to have at least two thirds of the Scottish electorate saying they wanted independence before it became a serious prospect.

“As far as I know it’s only just over the 50 percent mark, and I can’t believe that’s anywhere near enough to make it happen when there’s such a serious campaign about it already under way.”

The most recent poll, carried out by Panelbase for The Times, found that just 52 percent of Scots backed an Indyref2.