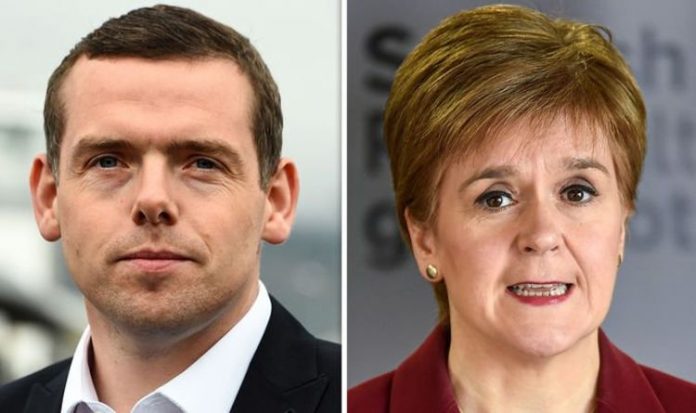 Mr Ross, aged 37, took over as Scottish Tory leader after Jackson Carlaw resigned last month. Writing in the Sunday Telegraph he argued the SNP are focusing on breaking up the union to distract from their record in government.

He said: “We should remember why it is that the Nationalists are so keen to have these confected rows with Westminster. They want to demonstrate that the Union is unstable.

“And, increasingly, it’s because they know it helps distract attention from their utterly abysmal record as a government in Scotland.

“Over the last few days, students from across Scotland have taken to the streets to protest over the exams fiasco which the SNP has presided over this summer.

“The Scottish Government’s incompetence in this scandal is appalling and off the scale.

“Little wonder Nicola Sturgeon is keen to point at the Westminster bogeyman rather than accept responsibility for her government’s failures.”

There has been controversy in Scotland over the way exam results have been graded by the Scottish Qualifications Authority (SQA).

Some 125,000 predicted grades were lowered by the SQA based on factors like school’s historic performances.

However this disproportionately hit poorer students with 15.2 percent of those from the most deprived data zones having their grades reduced versus 6.9 percent for the most affluent.

As Mr Ross is an MP in the UK Parliament Conservative MSPs in the Scottish Parliament will be lead by Ruth Davidson.

Mr Ross also used the article to explain why he believes in the British union.

He said: “My mission – as I take over as the new leader of the Scottish Conservatives this week – is to take on the half-baked nationalist case set out by Nicola Sturgeon by re-making the positive case for the benefits of our union, a case that is as strong now as it ever has been.

“The Coronavirus pandemic has demonstrated those benefits in full.

“Millions of workers have benefited from the UK Government’s furlough scheme, one only made possible by the country’s broad fiscal shoulders.

“Nobody has been asked to set out whether they are Scottish, Welsh, English or Northern Irish in order to receive prompt support.

“As with the healthcare support we receive from the NHS when any of us walk into a hospital in any part of the UK, that is the unquestioned, unequivocal benefit we get from a union which is blind to our nationality.”

In 2014 Scotland voted against independence by 55 percent to 45 percent.

However the SNP are now demanding a second referendum on the question takes place.

Mr Ross will face his first electoral test in May with the Scottish Parliament elections.