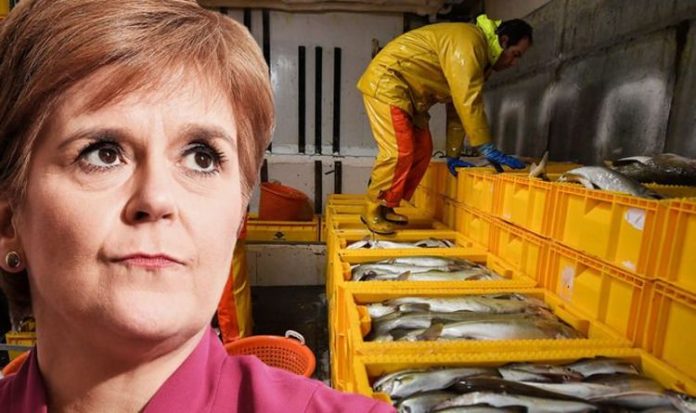 The Scottish First Minister regularly clashes with Prime Minister Boris Johnson over devolution, with Ms Sturgeon demanding more power for Edinburgh. They were embroiled in a bitter exchange in November after Mr Johnson branded devolution “a complete disaster north of the border”. Ms Sturgeon responded furiously, saying: “Worth bookmarking these PM comments for the next time Tories say they’re not a threat to the powers of the Scottish Parliament – or, even more incredibly, that they support devolving more powers.

Issues the Scottish government tried to take control over were fisheries and agriculture, but the Supreme Court rebuffed Ms Sturgeon and co in 2018.

The Supreme Court ruled at the time farming and fishing were “outside of the legislative competence” of Holyrood.

Judges added that “as a whole”, the bill was within the Scottish Parliaments’s powers – but said MSPs did not have the authority to rule on farming and fishing issues.

The dispute started in March 2019 as Scottish Parliament passed its own Brexit bills after opposing then-Prime Minister Theresa May’s withdrawal agreement with the EU.

MSPs refused to accept the new allocation of powers that had been held previously by Brussels.

However, the President of the Supreme Court, Lady Hale, did admit that “the whole of the Scottish bill would not be outside the legislative competence of the Scottish Parliament” – but fishing and farming would be.

The judges explained that changes made later to the UK legislation, which prevented MSPs from modifying various elements, meant that a further 21 provisions could not go through as a result.

Then-Scottish Secretary David Mundell commented that the court had “provided much-needed legal clarity” and shown that the bill “goes beyond the powers of the Scottish Parliament”.

But Cabinet Secretary for the Constitution, Europe and External Affairs Mike Russell accused the Government of “vandalism”.

Director of public policy at Pinsent Masons, Andrew Henderson, told City AM at the time: “Of the many challenges posed by Brexit, its potential impact on the UK’s devolution settlement is proving increasingly complex.

Pete Wishart said the Scottish government should organise a referendum on independence itself and begin to “withdraw from the apparatus of the British state”.

She said: “Would there be a unionist boycott? [In the event of a unilaterally declared vote] I think this is quite likely.