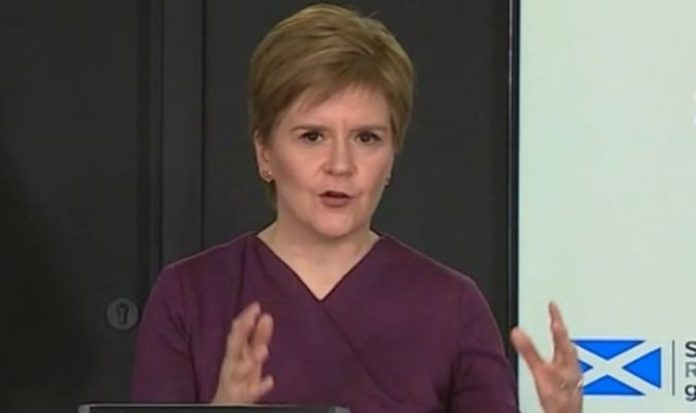 First Minister Nicola Sturgeon has suffered criticism after admitting she wanted the people of Scotland not to mix or travel during the Christmas period. During her coronavirus briefing on Wednesday, the SNP leader said she and the leaders of the other devolved nations agreed on relaxing restrictions for five days around Christmas. However, she went on to say that the mixing of the other three households should be considered the maximum and that she hoped no one would mix if they didn’t have to.

Ms Sturgeon quickly faced a backlash on social media with people accusing the First Minister of a confusing message.

One Twitter user wrote: “Nicola Sturgeon has stated to the Scots, you can go, but it is safer not to.

“Why did she say you can go, the reason is clear, she cannot risk losing votes, they should just be honest.”

Another wrote: “Sturgeon has rightly been lauded over the last 9 months but this decision is baffling.”

During the briefing, Ms Sturgeon said: “If you don’t need to travel and see other people, I really would prefer that you didn’t.

“I’m not trying to say to people Christmas will be fine, go and enjoy yourself though I am hoping people find ways of enjoying themselves.

Others criticised Ms Sturgeon for lack of leadership and not agreeing to a policy that she may personally disagree with.

“A social media user wrote: “Leadership isn’t agreeing to something you know is wrong.

“Leadership would have been her standing up to this frankly ridiculous decision.

“She is as culpable as Westminster for the cases or deaths that follow.