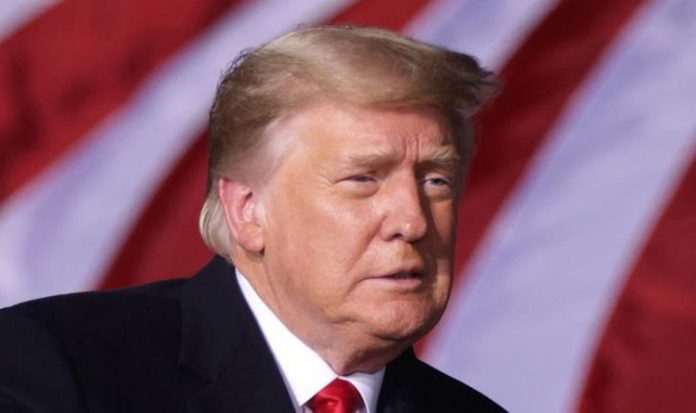 It followed a report in the Sunday Post that Mr Trump could be planning to spend time at one of his two Scottish golf courses. Speaking to Fox News Judd Deere, deputy White House press secretary, commented: “Anonymous sources who claim to know what the President is or is not considering have no idea.

“When President Trump has an announcement about his plans for January 20 he will let you know.”

The Post cited unnamed Prestwick airport insiders who claimed US military surveillance aircraft have been at the site for the past week.

One said the airport had received a booking for “American military version of the Boeing 757 on January 19”.

They added this could be the aircraft “normally used by the Vice President but often used by the First Lady”.

Trump Turnberry, one of the president’s luxury resorts in Scotland, is situated south of Prestwick.

Mr Trump has refused to confirm whether he will attend Mr Biden’s inauguration on January 20.

Since the election he has continued to claim, without providing solid evidence, that the vote was rigged against him.

The Trump campaign launched a number of unsuccessful legal actions in a bid to overturn the result.

In reference to the rally President Trump tweeted “I will be there. Historic day!” on January 3.

March organisers are using the hashtags #StopTheSteal and #DoNotCertify to urge Congress not to recognise Mr Biden’s election victory.

Mr Biden has hit out at the president’s attacks on the election result.

On January 4 he tweeted: “In America, politicians can’t assert, take, or seize power.

“It has to be given by the American people.

“We can’t ever give that up. The will of the people must always prevail.”

Ahead of Wednesday’s rally police in Washington DC arrested the leader of the far-right Proud Boys over alleged property damage.

It followed Proud Boys supporters burning several ‘Black Lives Matter’ banners and flags during a previous protest against the election result in the city.

Police attempted to separate Proud Boys and other Trump supporters from counter-protestors, some dressed all in black, at the December rally.