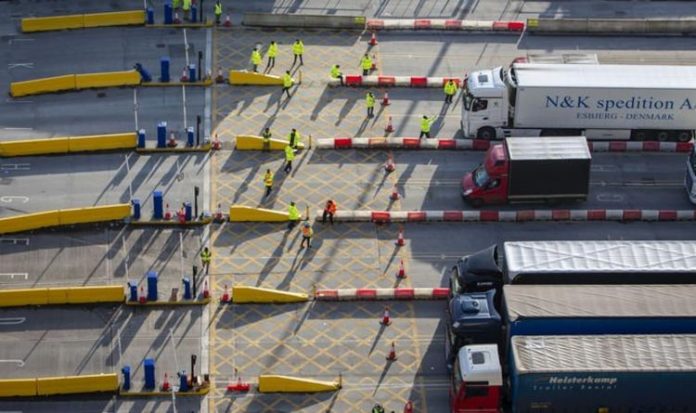 New paperwork is now required for freight travelling to the EU and Northern Ireland, which doomsayers predicted would cause chaos at ports. But there were no customs hold- ups as vehicles cleared checkpoints with speed and ease. It comes as more Covid-19 testing sites for drivers crossing to France were rolled out. Truckers leaving the UK must produce a negative result in the 72 hours before arrival.

The seamless operation at Dover – Britain’s busiest port, through which 10,000 lorries pass every day – comes as analysis showed more than 8,400 migrants crossed the Channel to the UK last year, four times the number in 2019.

At least 8,417 people successfully reached the UK in small boats. Numbers peaked in September, with at least 1,951 crossings – more than the total for the whole of 2019.

A two-week stretch in August saw crossings every day, with more than 1,200 people reaching the UK.

On September 2, 416 migrants landed in small boats, a daily record.

Last year, the Daily Express exclusively revealed that British taxpayers forked out £139,178.83 every day for a decade trying to stop illegal immigration from France.

Desperate families have been strong-armed into paying ruthless people traffickers tens of thousand of pounds for passage, often in overcrowded, dangerous crafts.

The Home Office said: “The UK Government is committed to working with France in order to maintain the integrity of our shared border. Tackling illegal migration requires sustained investment from both countries, in order to improve security procedures and detection capabilities.”