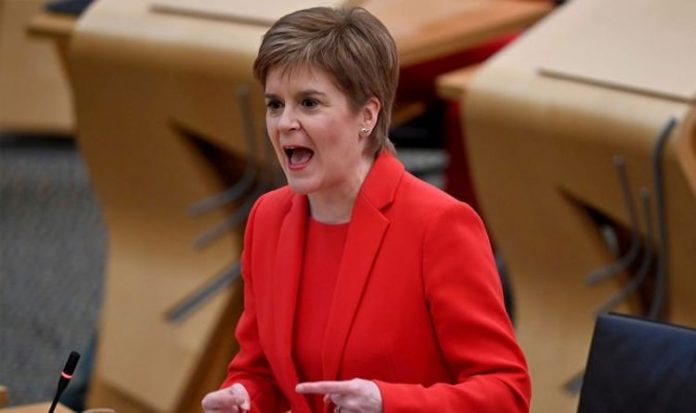 At 23:00 on December 31 Britain exited the EU’s Brexit transition period during which it had continued paying into the Brussels budget and implementing many EU laws. Instead the UK and EU will trade based on a new agreement approved by Boris Johnson and voted through Parliament on December 30.

However Ms Sturgeon, who has backed second referendums on both Scotland’s place in the UK and Britain’s EU membership, used the occasion to claim Scotland will reconnect with Brussels.

The SNP leader tweeted: “Scotland will be back soon, Europe. Keep the light on.”

She accompanied this with a photo showing the words “Europe” and “Scotland” being projected into an EU building in Brussels, with a heart placed where they intersect.

One commented: “You are aware just over one million Scottish voters voted for Brexit as well?”

Another added: “Scotland will always be in Europe.

“But we will not be back in the EU.

“Even if you do achieve Scexit, your own people say it will be approximately 19 years before we would be eligible to join.”

The SNP voted against Mr Johnson’s Brexit deal when it came before Parliament on December 24.

Douglas Ross, the Conservative leader in Scotland, was fiercely critical of the decision.

He tweeted: “Today the SNP will vote against the EU-UK Trade Deal and vote for a No Deal Brexit.

“Scottish Labour are unsure whether they are supporting #NoDealNicola or not.

“It is clear that only Scottish Conservatives can stand up to the SNP, and put Scottish jobs and livelihoods first.”

The end of the Brexit transition period means Britain no longer has to apply laws made in Brussels or pay into the EU budget.

Mr Johnson said this means the UK now has “freedom in our hands” and can do things “differently and better” than the EU.

Under the new deal Britain will continue to have tariff free access to the EU’s internal market.

However Northern Ireland remains within the European single market with some checks on goods travelling between it and the rest of Britain.

There are concerns the new arrangement could cause disruption around British ports if UK lorry drivers haven’t completed the required paperwork.