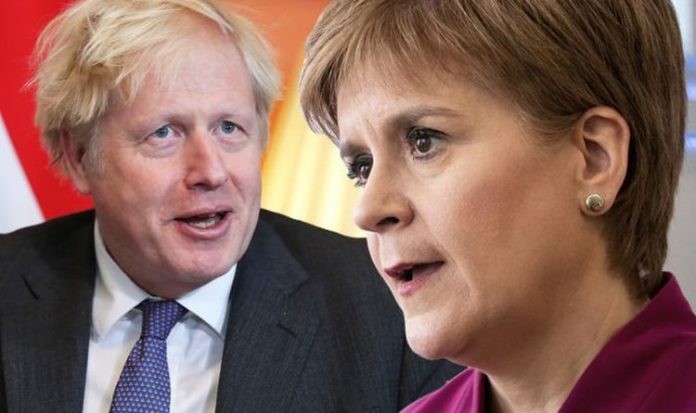 The Brexit process eventually ended with Prime Minister Boris Johnson securing a trade deal with the EU. But preceding this moment were four-and-a-half years of tense negotiations, in which former Prime Minister Theresa May failed three times to get her deal through Parliament. The deadlock even saw calls for a second vote while Brexiteers clamoured for the result of the 2016 referendum to be delivered on. The long, arduous Brexit process should serve as a warning for an independent Scotland, according to one expert.

The UK’s departure from the EU appears to have shifted the goalposts when it comes to Scottish secession.

Around 62 percent on Scots voted Remain in 2016, and since the UK officially left the bloc in January 2020, support for independence from the UK has grown.

In recent months, 20 consecutive polls have put a Yes vote ahead while Nicola Sturgeon’s SNP look set for a dominant Scottish election victory in May.

Mairi Spowage, deputy director of the Fraser of Allander Institute said in February last year that Brexit changes the independence debate from the one had in 2014.

She said: “In 2014 there was a choice between the status quo and independence.

“But with Brexit there is going to be economic change and uncertainty no matter what the people of Scotland decide to do. It does frame the argument differently.”

Thomas Pugh, economist at Capital Economics, believes that independence will be far more complicated than Brexit.

He told The Telegraph: “The two economies are so interlinked it would make Brexit seem like a walk in the park.”

Scottish exports to the rest of the UK are more than three times higher than those to the 27 EU countries.

More than a fifth was sent to the rest of the world and just 19 percent went to the EU.

David Phillips, economist at the Institute of Fiscal Studies drew comparisons between Scottish independence and the UK’s withdrawal from the EU.

He said: “If trade barriers and a lack of access to your biggest trading partner is a problem, then leaving the UK and rejoining the EU to have trade barriers with the UK surely causes an economic hit.

“In the short to medium that is likely to be larger than the hit to Scotland from having trade barriers with the rest of the EU.”

In terms of the political negotiations, expert Dr Kirsty Hughes warned in 2020 that the EU will hold “all of the cards”.

She said: “Scotland’s negotiators and politicians would need to be aware or learn what the CEE (Central and Eastern European), and other candidates have had to learn, sometimes painfully – that these are not really two-sided negotiations.

“Accession talks are a process where the EU holds all the cards and is scrutinising each candidate, in great detail, as to whether it comes up to the mark or not.

“It is not a moment or process to ask for several or major exceptions or opt-outs, though there may be some specific issues where some transition or exception will be considered.”

She estimated that an independent Scotland could join the bloc in around five years, depending on how long it takes for a referendum to be granted.

Philippe Lamberts, a senior MEP and head of the European Greens in Brussels, told Express.co.uk that Scotland would be welcome in the EU.

He also claimed Scotland could be better off than the UK post-Brexit.

“When you see the way the Tory party disregards the judiciary, wants to get out of the European Convention on Human Rights, these are all arguments that can convince Scottish citizens to protect their basic freedoms.”